At $1,833.90, the gold price is trading around flat by mid-day New York trade and has stuck to a $1,830.83 and $1,843.66 range so far in a fickle trading environment. There has been some bargain hunting on Wall Street following last week’s sell of in stocks as investors move in on the energy and tech sectors, dragging the benchmarks higher with energy leading the pack.

Gold is failing to benefit from a softer US dollar and risk-on environment as the wider focus stays on the rate hike narrative. Growth, all sectors in stocks are in the green and the Dow Jones Industrial Average jumped is now over 2% higher, with the S&P 500 up 2.56% to 3,761 and the Nasdaq Composite 2.8% higher.

However, US 10-year Treasury yields are up over 1% which has dimmed appeal for the yellow metal, coinciding with the Federal Reserve’s biggest interest rate hike since 1994 made earlier this month with more of the same expected in July from the US central bank .

”For the time being, these forces have allowed gold to avoid a large-scale liquidation event, but proprietary traders continue to hold a massive amount of potentially complacent speculative length in the yellow metal. Ultimately, this still leaves the bias to the downside under the weight of a hawkish Fed.”

In this regard, this week’s main event will be Fed Chair Powell’s semi-annual monetary policy report to Congress. ”Given the dramatic breakout in inflation, we expect Powell to robustly emphasize the Fed’s inflation credentials in front of lawmakers who face mid-term elections in November,” analysts at ANZ Bank explained.

Central banks in general are moving in line with the European Central Bank looking to soon move to incremental 50bps moves and the Bank of England singing from the same hymn sheet, seeking to step up the intensity of its tightening.

ECB President Lagarde re-iterated guidance this week that interest rates will rise 25bp in July. Analysts at ANZ Bank noted that the ECB is accelerating work on an anti-fragmentation tool and argue that the latter is ”necessary to enable the ECB to raise interest rates and meet its 2% inflation target over the medium term.”

”We think once the anti-fragmentation tool is designed and adopted, it will pave the way for a more rapid tightening in monetary policy.”

Stronger rate hikes, rising yields and strengthening currencies are a headwind for gold and the sell-off in the equity markets hasn’t added any safe-haven demand.

On the other hand, investors are watchful for whether the central banks can balance out the risks of higher rates and stronger currencies vs. The gloomy economic backdrop and increasing supply risks which could ultimately serve to support gold in the longer term. Inflation and economic uncertainties usually spur safe-haven buying of gold but rising interest rates increase the opportunity cost of the non-yielding bullion.

The 4-hour chart above illustrates that the price is starting to melt to the downside following a restest of the M-formation’s neckline and a subsequent retest of an order block.

The expectations are bearish with MACD piling up in negative territory which opens the prospects of a move towards the mid-month lows. This is an area of ​​inefficiency from where the price rallied sharply but left behind a price imbalance between there and $1,813 that is vulnerable to mitigation.

The following attempts to illustrate the market structure from a bearish bias more clearly: 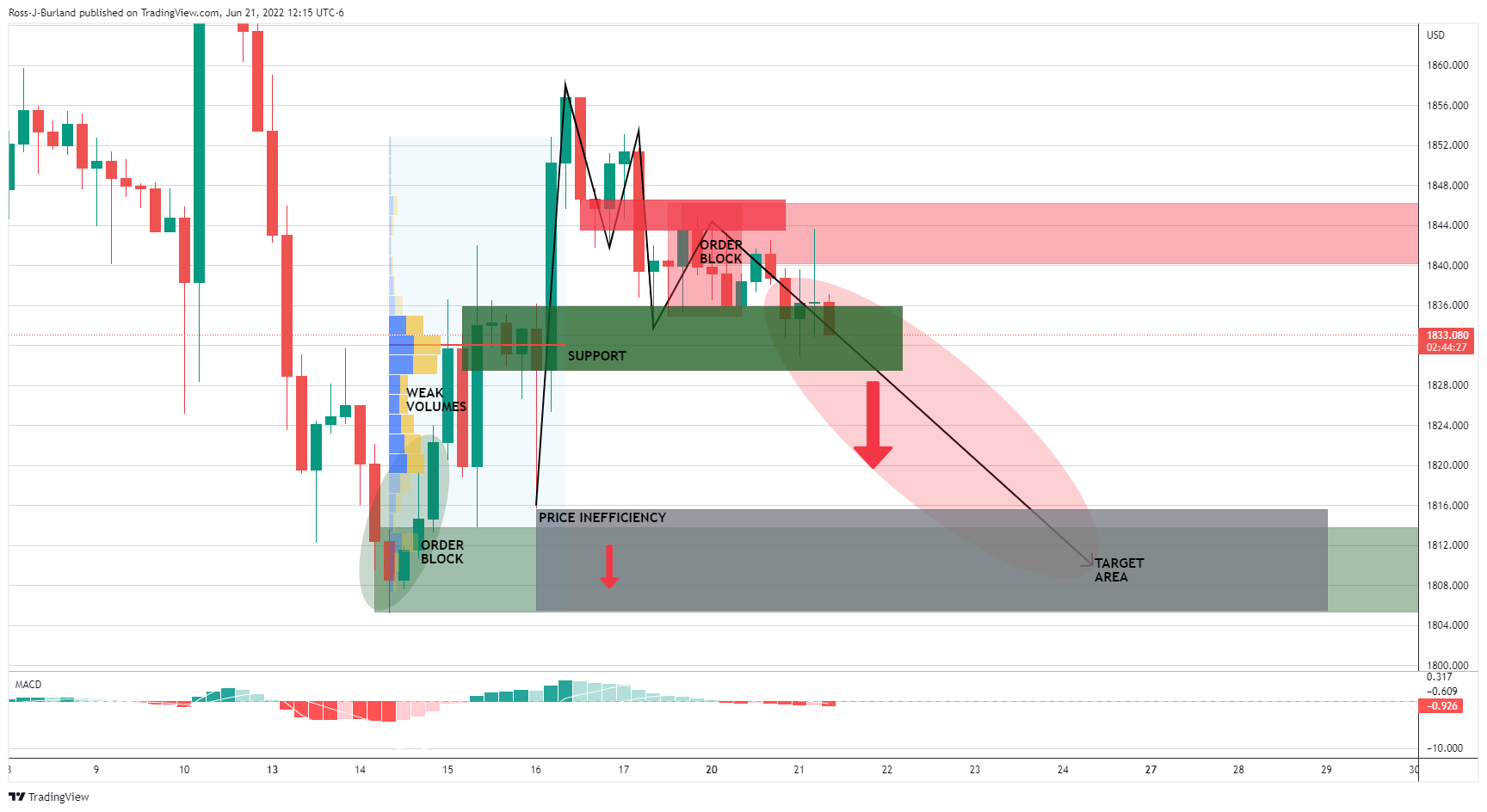