Brent crude oil remains above the $100/barrel mark after yesterday’s announcement that China plans to stimulate its economy via a large stimulus package giving global commodities a lift. On the supply side, restrictions in the flow of Kazakhstan oil from the Black Sea due to oil spill infringements should help bolster brent upside.

The EIA weekly storage report yesterday saw US inventories increasing thus weighing on crude upside however, the more prevalent limiting factor comes from the greenback and concerns around a global recession. Today’s Non-Farm Payroll (NFP) release may help reverse the narrative but I would think a large miss on the estimate would need to occur to see some dollar weakness. As always, the Baker Highs rig count comes in later this evening but I do not foresee much in the way of price impact on crude prices. 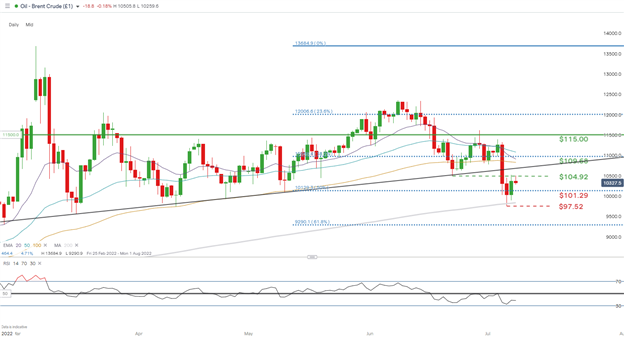 Price action on the daily brent crude chart sees the key area around $104.92 holding as resistance for now. While the momentum remains bearish as shows by the Relative Strength Index (RSI), there is an element of uncertainty in terms of a directional bias. The dollar does not look like letting up at this point and could continue to weigh negatively on brent prices short-term.

IGCS shows retail traders are marginally NET SHORT onCrude Oilwith 51% of traders currently holding long positions (as of this writing). At DailyFX we typically take a contrarian view to crowd sentiment however, after recent changes in positioning we settle on a short-term bias bias.