The British Pound has been in the limelight of late as Boris Johnson ended off a vote of no confidence in the midst of growing Brexit tensions. While Johnson was able to hold off the dissenting Conservatives, the larger than expected mutiny will surely be ringing alarm bells at 10 Downing Street. Domestically, consumers continue to feel the pain of rising inflation, most notably in the cost of energy. The overarching theme of central bank policy continues to dominate the FX space, as the European Central Bank (ECB) meets this week while the Bank of Japan (BoJ) stands firm on its easy stance.

The reluctance of the Bank of Japan to abandon their extremely accommodative policy slate has seen Yen crosses shoot to the moon of late, as interest rate differentials continue to widen by the day. USD/JPY now approaches 134, while CNHJPY has risen back to the key 20.00 level.

GBP/JPY has been no exception, posting 11 consecutive positive sessions. Price has surged higher to retest the April high of 168.428, with Tuesday’s price action briefly breaking above that high to 168.537. Should we see more serious verbal intervention out of Japan, we could be in store for a change in sentiment surrounding JPY. But with interest rate differentials continuing to crush the Yen, GBP/JPY may look to extend its recent streak.

EUR/GBP has been creeping higher of late as we close in on the June ECB policy meeting. Despite a series of higher swing lows, EUR/GBP has run into a stiff resistance zone between 0.8580 and 0.8600. With the pound having fared well in the face of severe political uncertainty, all eyes now shift to Christine Lagarde and the European Central Bank for clues as to a near-term direction.

With markets effectively priced for ECB liftoff in July, the bar for a hawkish surprise remains high. EUR/GBP remains at risk from lingering Brexit tensions, as the EU and UK battle over the Northern Ireland protocol. With this in mind, 0.8600 remains a firm barrier that bulls have yet to crack. Should the ECB be perceived as dovish on Thursday, we could revisit recent support around the 0.8472-0.8500 region. 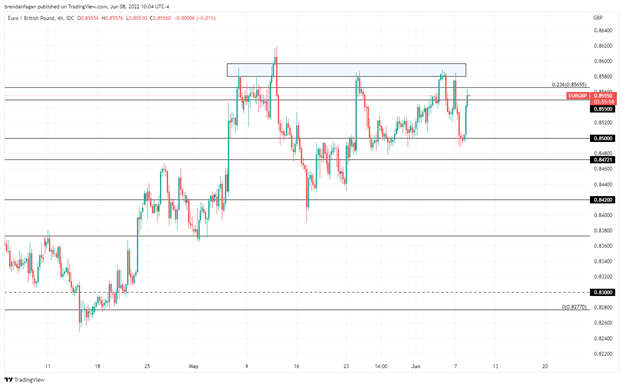 Whether you are a new or experienced trader, we have several resources available to help you; indicator for tracking trader sentimentquarterly trading forecastsanalytical and educational webinars held daily, trading guides to help you improve trading performance, and one specifically for those who are new to forex.