Here’s a quick look at major inflection points and chart patterns on crude oil and EUR/GBP.

EUR/GBP has just broken through the neckline of a short-term head and shoulders pattern on its 4-hour time frame.

What’s next for this forex pair?

A selloff that’s the same height as the reversal formation might follow, possibly sending a lower price by roughly 300 pips.

The 100 SMA is below the 200 SMA, after all, confirming that the path of least resistance is to the downside. Also, the gap between the moving averages is widening to reflect strengthening bearish pressure.

Just be careful since Stochastic is already cruising around the oversold region to indicate seller exhaustion. This could mean that a quick pullback to the broken neckline might offer a better price to short! 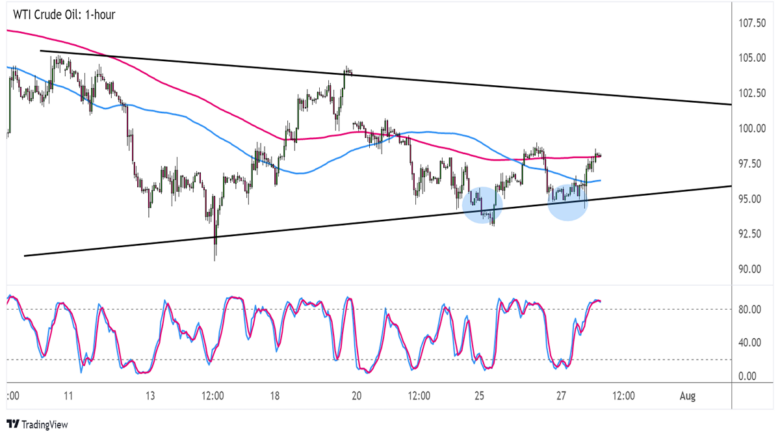 WTI crude oil has formed lower highs and higher lows to consolidate inside a symmetrical triangle on its hourly chart. At the same time, a tiny double bottom pattern is forming right after the support bounce.

This suggests that the commodity price could climb right back to the top of the triangle around $102 per barrel or higher.

All it has to do is clear the neckline resistance that happens to line up with the 200 SMA dynamic inflection point!

The 100 SMA is below the 200 SMA, though, which means that resistance levels are more likely to hold than to break. Also, Stochastic is in the overbought region to signal a potential return in selling pressure soon.

In that case, another dip to the triangle bottom around $96 per barrel might take place or perhaps even a breakdown. If the latter scenario happens, crude oil could tumble by the same height as the triangle pattern.