I’m keeping it simple today with these classic chart patterns on these hourly charts of CHF pairs.

Will we see breakouts on these pairs soon?

Here are the levels I’m watching.

This pair has formed lower highs and found support around the 1.1540 mark, creating a descending triangle on its hourly time frame.

Price is hanging out at the top of the triangle, which seems to be holding as resistance for now. Will GBP/CHF aim for the bottom again?

Sellers have the green light to hop in, at least based on moving averages and Stochastic indicators.

The 100 SMA is below the 200 SMA to signal that resistance levels are more likely to hold than to break while the oscillator is moving south from the overbought zone. This means that bearish pressure is in play and could stay on until oversold conditions are met.

If selling momentum is sustained, GBP/CHF might even break below the triangle bottom. This could trigger a selloff that’s the same height as the chart pattern, so watch out! 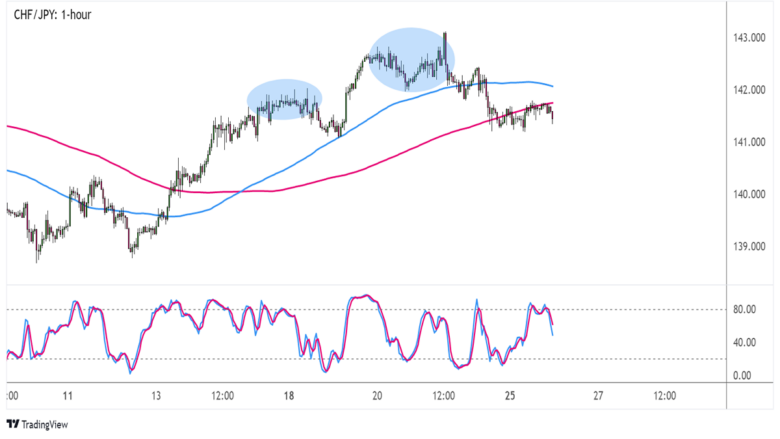 Heads up for this head and shoulders pattern forming on CHF/JPY!

The pair has yet to complete its second shoulder, but it looks like technical indicators are pointing to a downtrend soon.

Stochastic is making its way down from the overbought area, indicating that sellers are taking over while buyers are exhausted.

The 100 SMA is above the 200 SMA, though, so there’s a chance the uptrend might resume. Then again, the gap between the moving averages is narrowing to hint at a potential bearish crossover.

If that happens, CHF/JPY could slip below the neckline near the 141.00 handle and go for a decline that’s the same size as the formation. That’d be roughly 200 pips yo!