The DAX posts moderate gains during the European session to follow up from yesterday’s gains of around 1.06%. Concerns remain around rising rates and slowing growth which could spark a global recession. The positive sentiment in Europe comes as global markets appear to be staging a comeback rally after a tumultuous last week, after several global central banks continued, or in some cases began tightening monetary policy to tame red-hot inflation.

Yesterday we had testimony from European Central Bank (ECB) President Christine Lagarde, who reiterated the central bank’s intention to raise interest rates in July and September even after the recent volatility in the Eurozone’s bond markets.

Surging inflation and the higher interest rates to combat this have It resulted in corporate distress in companies in Germany, the UK, France, Spain, and Italy reaching the highest levels since August 2020, according to the Weil European Distress Index.

Concerns have grown, meanwhile, as the deteriorating relationship between the EU and Russia threatens to create larger obstacles for the Euro Zone. Any interruption in energy supplies, particularly to Germany could leave Europe’s most industrialized economy reeling. This would undoubtedly have a negative impact on the Dax and many of its constituents.

Having seen moderate gains this morning, no sector stands out as consumer discretionary andreal estate lead the way with gains of 1.63% and 1.38% respectively. While notable movers included vehicle stocks such as Daimler, Porsche and BMW ST all post marginal gains between 1-1.5%. Zalando meanwhile, after a positive recent run lags on the day, down approximately 4.3%.

From a technical perspective, we had a bearish candlestick close (weekly candle) last week which below key support that turned resistance closed at the 13270 area. Friday’s daily candle as we can see from the chart above closed as an inverted hammer and created an inside bar pattern. We have seen upside movement since the inside bar pattern was identified.

The RSI also tapped into the 30 level which is a potential sign of oversold territory. Price is hovering above the 13300 level with a rejection from here opening up further downside and the likely retest and break of the 13000 area. A candle breaking and close above the blue horizontal (13050-13070) line could lead to further upside and potentially back above the 14000 handle.

European stock markets advanced on Tuesday amid Britain’s biggest nationwide rail strike for 30 years.In London, the FTSE 100 rose 0.4% after opening marginally higherfollowing strong gains in the previous session. The rail strike comes in the midst of an ongoing dispute over pay, jobs and conditions for rail workers. So far there has been 18 months of negotiations between Network Rail and the RMT union. Tens of thousands of staff walked out today, paving the way for widespread industrial action across the economy in coming months. The majority of lines on the London Underground were also largely closed due to a separate strike.

The Center for Economics and Business Research have warned that the three strikes taking place today, on Thursday and on Saturday will have a fallout worth at least £91m to the UK economy.Richard Burge, chief executive of the London Chamber of Commerce and Industry, said: “While this strike will be damaging, a recession is likely regardless; as such, I wouldn’t‘t pin an eventual recession on this strike.”

A relatively quiet day for the UK on the calendar front, however, we have heard interesting comments from Bank of England (BOE) member Catherine Mann. Ms. Mann stated her belief that a weak pound makes the case for larger rate hikes, as a weaker pound will only serve to fuel inflation.

FTSE gains this morning were mostly attributable to the energy sector, followed closely by materials which posted gains of 1.95% and 1.76%, while all sectors were positive with the exception of utilities which were down 1% in the session.

Among the notable movers on the FTSE 100 were Melrose PLC closely followed by Avast and Glencore with gains of 3.7%, 2.2% and 1.9% respectively. 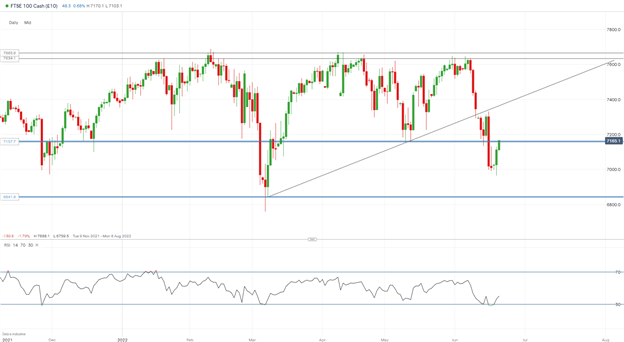 The FTSE continued its move higher this morning following on from yesterday’s positive close. On the daily chart we have formed a bullish engulfing hammer candle, which coincided on the daily timeframe with an RSI indicating the possibility of oversold conditions. We are currently testing previous support that is now resistance around 7150 with a rejection leaving price poised for a retest of the support area at 6840. A break above the resistance area at 7150 could see a retest of the trendline around the 7350-7400 area.

US Equitieshave gained in premarket trade on the back of Monday’s Juneteenth holiday in the United States. Tuesday’s trading session comes after a volatile week that saw major central banks signal a more aggressive effort to curtail soaring inflation.

This week has provided mixed signals so far with sentiment being helped by US President Joe Biden’s remark that a US recession isn’t inevitable. At the same time many on Wall Street are skeptical, as strategists at both Morgan Stanley and Goldman Sachs Group Inc. Advise equities may have further to fall. Meanwhile, the world’s richest man Tesla Inc. CEO Elon Musk spoke at the Qatar Economic Forum where he stated his belief that a recession is inevitable “at some point”.

On the calendar front we had the Chicago Fed National Activity Index for May which came in better than expected, with a print of 0.01. We also have existing home sales and Federal Reserve member Tom Barkin speaking later in the day. Fed Chair Jerome Powell starts his two-day testimonybefore the Senate Banking Panel on Wednesday and the House Financial Services Committee on Thursday.

The DOW moved higher in early European trade, gaining approximately 300 points to post a session high of 30411. Among the biggest movers in premarket trade were American Express Co and Boeing Co posting gains of 4.8% and 2.6% respectively. 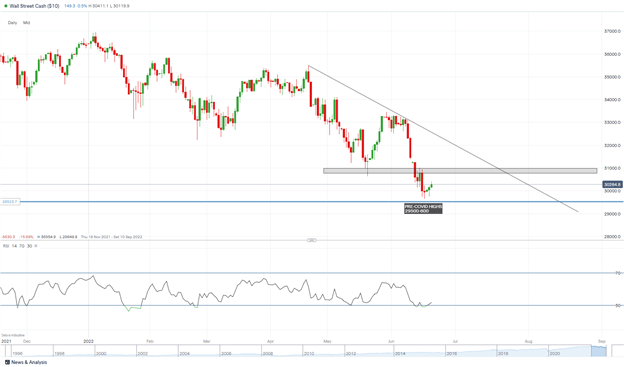 Following other major Equities, Dow breached our support area 30500 last week before posting further declines toward our psychological 30000 level. On Friday we had a daily candle close below the 30000 level with a low of around 29576 before a moderate bounce.

Price is back above the psychological 30000 level for now, with pre-covid highs providing support at the 29500 area. The gray highlighted box on the chart is our first area of ​​resistance around 30700 with a break above possibly leading to a third touch of the descending trendline drawn from April 21 highs.