The USD/CHF retreats from the 0.9600 figure after an earlier USD rally that faltered to break above the former figure, and so far has retraced just above the 100-day moving average (DMA), which lies near 0.9514. At the time of writing, the USD/CHF is trading at 0.9540 in the North American session.

Sentiment is still dismal due to renewed fears that high inflation and a global economic slowdown are a stagflation scenario. US equities are under pressure for their worst percentage fall since the 1970s, while the US Dollar turned negative and remains below the 105,000 figure, losing 0.38%.

That said, the USD/CHF seen around the 0.9546-0.9594 on mixed US economic data, followed by a drop towards Thursday’s central daily pivot point at 0.9540, a level where the major settled in.

The double top in the USD/CHF daily chart is still in play, though USD/CHF sellers are struggling to achieve a decisive break below the May 27 daily low at 0.9544. USD/CHF traders should be aware that the 100-DMA is meandering around that price level, though some 15 pips above the 0.9500 figure. A decisive break would send the major to probe the 100-DMA, followed by 0.9500, and then the March 16 high at 0.9460.

The USD/CHF, hourly time frame depicts the pair as consolidating but slightly tilted to the upside. The weekly low recorded Wednesday, around 0.9495, propelled the major upwards. However, the confluence of the 50 and 100-simple moving averages (SMAs) around 0.9553-61 capped the pair upside after the major dropped on mixed US data. Break below 0.9529 would send the USD/CHF towards 0.9495; otherwise, the major would be vulnerable to buying pressure. In that scenario, if USD/CHF buyers reclaim the 200-SMA at 0.9599, that would clear the way for further gains. 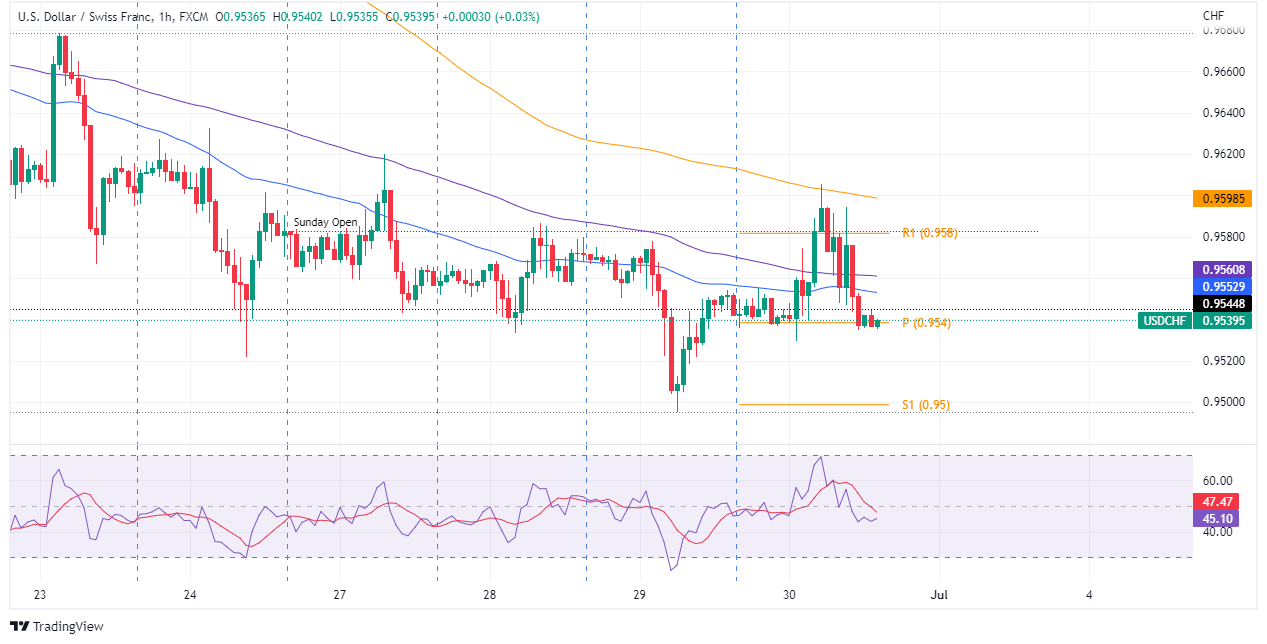