The long-awaited 6th wave of Russian sanctions has been agreed in the early hours of Tuesday morning. The latest wave includes a ban on seaborne Russian oil to the EU and will eventually look to ban oil delivered by pipeline to the landlocked countries such as Hungary, the Czech Republic and Slovakia.

The issue of expensive alternatives and complicated logistics to deliver oil to landlocked EU member states had held up what would otherwise have been a fairly straightforward process. Eventually, the European council agreed on a compromise, permitting Russian oil flows to the three aforementioned countries, which would result in an immediate 75% reduction in EU oil imports from Russia, increasing to 90% at the end of 2022. be finalized in the coming days with details still to be thrashed out.

The banning of Russian oil further restricts an already tight oil market as oil producers operate close to capacity. Additional supply constraints surfaced through a lack of infrastructure investment as the world makes a concerted shift towards greener, more sustainable energy sources. A softer US dollar, the re-opening of Shanghai and a general improvement in global risk sentiment certainly adds to a bullish narrative.

Brent Crude prices appear to have finally broken above the rather stubborn 114 level on the fourth time of asking. Subsequently, the move was aided by the news of the EU’s compromise, which sent oil prices above the key zone of resistance (115.50 – 118.50). However, the recent move appears to have found resistance at the March 23rd high at 120.50 as intra-day price action reveals a short-term pullback from that level. The RSIapproaching overbought territory, supports the idea that the recent advance may be cooling slightly before attempting another move higher.

Support currently resides at the upper side of the zone of resistance (118.50) followed by 115.50 and the significant 114 level.

The monthly chart helps identify relevant upside resistance levels. After breaching the zone of resistance, we see an area around 126.00 that previously kept higher prices at bay in 2011 and 2012. 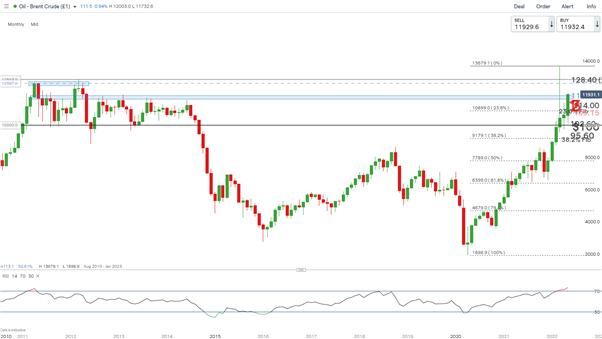 Retail clients, on aggregate, have been largely net-short in terms of positioning. Recent lift in longs however, complicates the contrarian indicator. 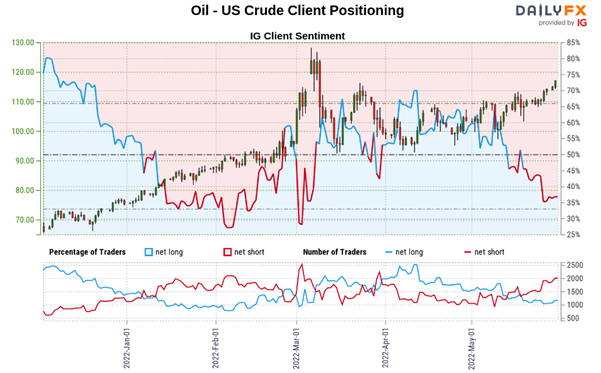 We typically take a contrarian view to crowd sentimentand the fact traders are net-short suggests Oil – US Crude prices may continue to rise.

Positioning is less net-short than yesterday but more net-short from last week. The combination of current sentiment and recent changes gives us a further mixed Oil – US Crude trading bias.