In this edition of Central Bank Watch, we’ll review comments and speeches made by various Federal Reserve policymakers since the May FOMC meeting. Although Fed policymakers have been in a communications blackout window since June 4, there has been a dramatic repricing of rate hike odds in recent days, particularly after a report in The Wall Street Journal that was rumored to come directly from Fed Chair Jerome Powell himself.

The recent tone by Fed policymakers between the May and June FOMC meetings doesn’t match the reality of what’s played out in rates markets in days. The fact of the matter is that the arrival of the May US inflation rate report (CPI) last week fundamentally changed perception around what the Fed will do in June, thereby rendering comments made by Fed policymakers in May and early-June outdated.

May 6 — Kashkari (Minneapolis president) said that he’s comfortable with some cooling of the US labor market as the FOMC tries to bring down uncomfortably high inflation rates.

Barkin (Richmond president) suggests that he would support faster rate hikes, noting “I never rule anything out. So I think anything would be on the table.”

May 9 – Bostic (Atlanta president) plays down the need for faster rate hikes, saying “I don’t think we need to be moving even more aggressively. I think we can stay at this pace and this cadence and really see how the markets evolve.”

May 10 – Mester (Cleveland president) indicates support for a 75-bps rate hike in the future, commenting “we don’t rule out 75 forever, right? The cadence we’re going now seems about right to me.”

May 11 – Bostic once again swats down the need for faster rate hikes, noting that the current cadence of “50 is a historic level…I am going to support staying at that more aggressive level until we get to neutral.”

May 12 – Daly (San Francisco president) says that “going up in 50-basis-point increments to me makes quite a bit of sense and there’s no reason right now that I see in the economy to pause on doing that in the next couple of meetings.”

May 13 – Master declares support for 50-bps hikes as the normal cadence, “unless there are some big surprises, I expect it to be appropriate to raise the policy rate another 50 basis points at each of our next two meetings.”

May 17 – Bullard (St. Louis president) indicates support for raising rates by 50-bps at successive meetings in June and July.

Kashkari notes “my colleagues and I are going to do what we need to do to bring the economy back into balance.”

Powell reiterates the FOMC’s commitment to tamping down inflation, commenting “if that involves moving past broadly understood levels of ‘neutral,’ we won’t hesitate at all to do that.”

May 18 – Evans (Chicago president) hints at a pause in the Fed rate hike cycle down the line, saying “we don’t have to constantly increase the funds rate to be restrictive. We can get to a restrictive setting and sit there for a while.”

May 19 – George (Kansas City president) reiterates hike support for 50-bps rates, and says that “I think what we are looking for is the transmission of our policy through markets understanding, and that tightening should be expected.”

May 23 – Bostic also hints at a pause in the Fed hike cycle, noting “aAfter we get through the summer and we think about where we are in terms of policy, I think a lot of it will depend on the on-the-ground dynamics that we are starting to see. My motto is observe and adapt.”

May 25 – May FOMC meeting minutes are released, when it’s revealed that “most judged that 50 basis-point participants increases in the target range would likely be appropriate at the next couple of meetings.”

May 30 – Waller (Fed Governor) says “I support tightening policy by another 50 basis points for several meetings.”

June 1 – Daly commits to rate hikes for the foreseeable future, noting that she is “comfortable to do what it takes to get inflation trending down to the level we need it to be.”

Bullard thinks that the FOMC has“a good plan for now” in terms of raising rates by 50-bps at each of the next few meetings.

June 2 – Brainard (Fed Vice Chair) says that, “from where I sit today, market pricing for 50 basis points, potentially in June and July, from the data we have in hand today, seems like a reasonable path,” but also that “right now it’s very hard to see the case for a pause.”

June 3 – Mester says that she thinks that another 50-bps rate hike might be appropriate in September, after raising rates by 50-bps at each of the June and July meetings.

After a new multi-decade high in US inflation rates, markets have once again dragged forward expectations for a rapid pace of rate hikes over the coming months. We can measure whether a Fed rate hike is being priced-in using Eurodollar contracts by examining the difference in borrowing costs for commercial banks over a specific time horizon in the future. Chart 1 below showcases the difference in borrowing costs – the spread – for the June 2022 and December 2022 contracts, in order to gauge where interest rates are headed by December 2022.

By comparing Fed rate hike odds with the US Treasury 2s5s10s butterfly, we can gauge whether or not the bond market is acting in a consistent manner with what occurred in 2013/2014 when the Fed signaled its intention to taper its QE program. The 2s5s10s butterfly measures non-parallel shifts in the US yield curve, and if history is accurate, this means that intermediate rates should rise faster than short-end or long-end rates.

After the Fed raises rates by 75-bps in June, there are six 25-bps rate hikes discounted through the end of 2022 thereafter. The 2s5s10s butterfly has traded sideways in recent weeks, suggesting that the market has retained its overall hawkish interpretation of the near-term path of Fed rate hikes. 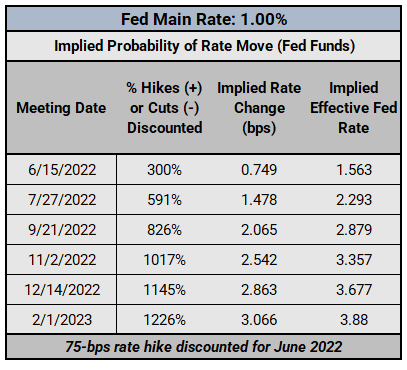 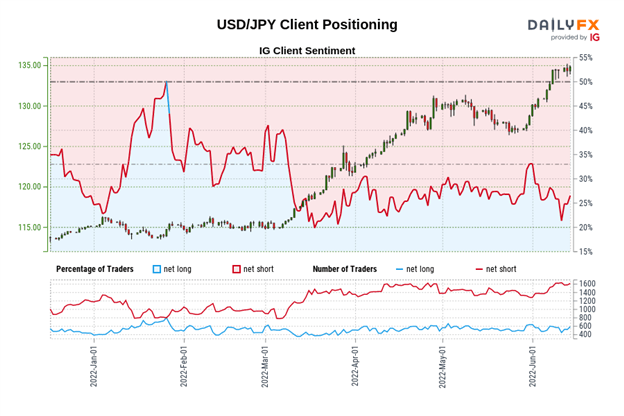 We typically take a contrarian view to crowd sentiment, and the fact traders are net-short suggests USD/JPY prices may continue to rise.

Positioning is less net-short than yesterday but more net-short from last week. The combination of current sentiment and recent changes gives us a further mixed USD/JPY trading bias.