At 1.2570, GBP/USD is moving lower and way from the highs of the day near 1.2585. The pair is otherwise up by some 0.68% and had rallied from a low of 1.2469 as the US dollar retraced some of its Wednesday gains ahead of and during another busy data schedule.

The highlights on Thursday were the decline in weekly initial jobless claims, a small upward revision to Q1 productivity, and a smaller-than-expected 128,000 gain in ADP private payrolls, all of which, however, to support the greenback.

ADP said small businesses are struggling to keep up with larger businesses when competing for workers. The services sectors added 104,000 jobs, led by a 46,000 increase in education and health services workers. Initial jobless claims moving by 11,000 to 200,000 in the week ended May 28, lowering the four-week average for the first time in nearly two months.

This data comes ahead of tomorrow’s Nonfarm Payrolls where analysts at TD Securities explained they see Employment likely continuing to advance firmly in May but at a more moderate pace after consecutive job gains at +428k in March and April. ”Employment in the household survey likely rebounded after printing negative in April. We expect this to lead to a drop in the unemployment rate to a post-COVID low of 3.5%. We also look for wage growth to remain steady at 0.3% m/m (5.2% YoY).”

However, there was some price activity around the Factory New Orders data that only rose by 0.3% in April, with transportation orders up 0.7% and the remaining categories combining for a 0.3% increase. Durable goods orders were revised higher to a 0.5% gain from the 0.4% increase in the advance estimate, while nondurable goods new orders advanced by only 0.2% after a 2.9% jump in March.

Recent comments from Federal Reserve officials point to an extremely high probability of a rate hike of 50 basis points at the June 14-15 Federal Open Market Committee meeting, so markets are pricing this in and it is unlikely to be swayed by the data.

There were no UK data on Thursday’s schedule and markets were closed for both Thursday and Friday for the Queen’s Jubilee. A further rate increase is expected at the Bank of England’s next monetary policy meeting on June 16. In line with expectations, the BoE hiked the Bank Rate by another 25bp to 1.00%. at the start of last month. Attention was on forward guidance and not the rate hike itself which came in slightly dovish.

”We still see risks skewed towards more rate hikes, as risk is that inflation continues to surprise to the upside.”

On Wednesday, the Bank of England Deputy Governor Jon Cunliffe said that the central bank was seeing evidence of a slowdown in the housing market.

“We see evidence of a slowdown in the housing market. There are some straws in the wind that show the market is starting to turn,” Cunliffe said in an interview with ITV News.

“The Bank expects the economy, that’s already slowing, and we expect it to slow further, to slow quite a lot over next year or so. And I think that will have an impact on the housing market.”

From a four hour perspective, the price is stalling on the bid into the remaining two hours of the candle. The price would be expected to be resisted by the opposing bearish structure and result in a near term correction towards prior lows that meets the 50% mean reversion level. First, bears will need to clear point A’s support to confirm the downside prospects. Should the bears clear this support structure, as well as the 50%, mean reversion, then the downside is open toward the recent lows in the 1.2450s ahead of the 1.2370s and the 1.2220s.

This is in line with the daily chart’s bearish bias as follows: 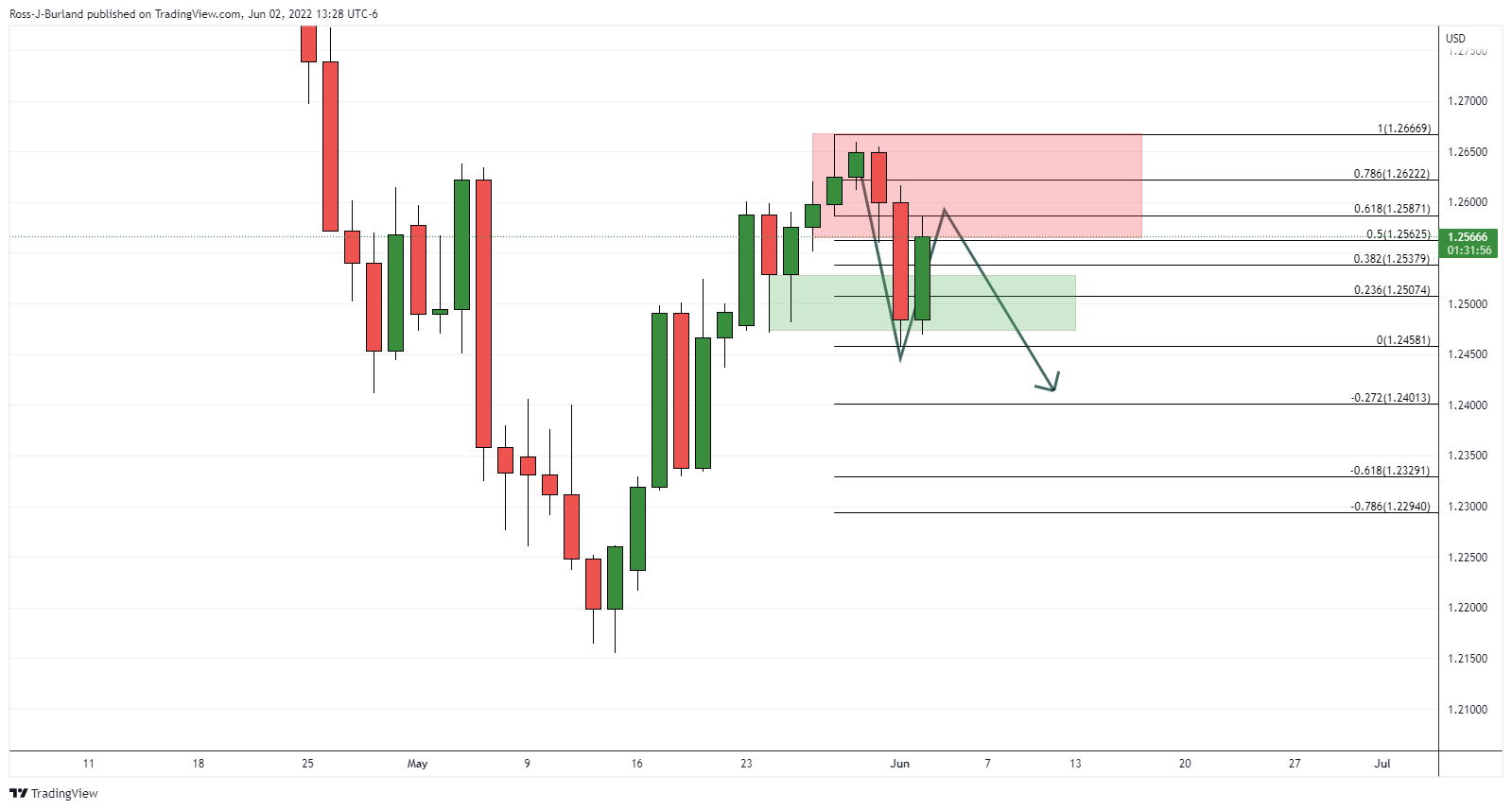