Firstly, UK Gross Domestic Product (GDP) was climbing 0.5% in May (estimates were 0.0%) and Industrial Production in June climbed 1.4% (estimates – 0.3%). This is a hawkish set of data with both numbers coming out faster than expected with the latest GDP data showing upward revisions across many sectors.

However, the pound has been hamstrung as the markets were in anticipation of the showdown event from the US in June’s Consumer Price Index. The greenback has rallied to a 20-year high against a basket of currencies after data on Wednesday showed US CPI surged to a 40-1/2-year high in June.

The consumer price index increased 1.3% last month as gasoline and food costs remained elevated, more than the 1.1% expected by economists polled by Reuters. This morning’s number is staggeringly high and the dollar index reached 108.59, the highest since Oct. 2002, from around 107.9 before the data was released. It is now back down to 107.90 which is lending a hand to the British pound.

However, political pressures could reach a climax Tuesday next week as the new 1922 executive meets, risking further pressures on the pound. Moving, the BoE will likely tighten its monetary policy more than we had previously forecast. On the other hand, in view of high inflation, it could be viewed as staying too cautious, which will not help the bulls. The central bank currently assumes that the additional fiscal aid from the government will have a positive economic effect, while the inflationary effect should be low. Developmental, traders are taking note that the economy is likely to weaken significantly in the coming quarters and past data, such as June’s, is a mere drop in the ocean.

Analysts at Commerzbank explained that the example of the BoE is a good illustration of the dilemma that many central banks are facing:

”Uncertainty has been very high for quite some time. The war in Ukraine is adding to this uncertainty. And the problem is that the war, with all its consequences, has an inflationary effect on the one hand, but could also weaken the economy on the other hand.”

”Hawkish comments on the part of BoE members increased, which is probably due to the persistently high inflation,” the analysts explained.

”In the short term, inflation are likely to be determining in the BoE’s monetary policy decisions. A tighter stance is quite possible in the coming months. After all, the BoE held out the prospect of a 50 bp rate hike for the August meeting at its last meeting.” However, the analysts argued that ”this is not necessarily positive for the pound, because rising interest rates exacerbate the risk of a stronger economic downturn.”

The monthly chart is heavily bearish but a meanwhile correction could be on the cards from the monthly demand area.

As for the daily chart, below, the price could be on the verge of a higher move in this bullish correction. The bulls will need to break the prior highs and in doing so, expose the 38.2% fibo on the monthly chart and price imbalances, gray zones, above there. 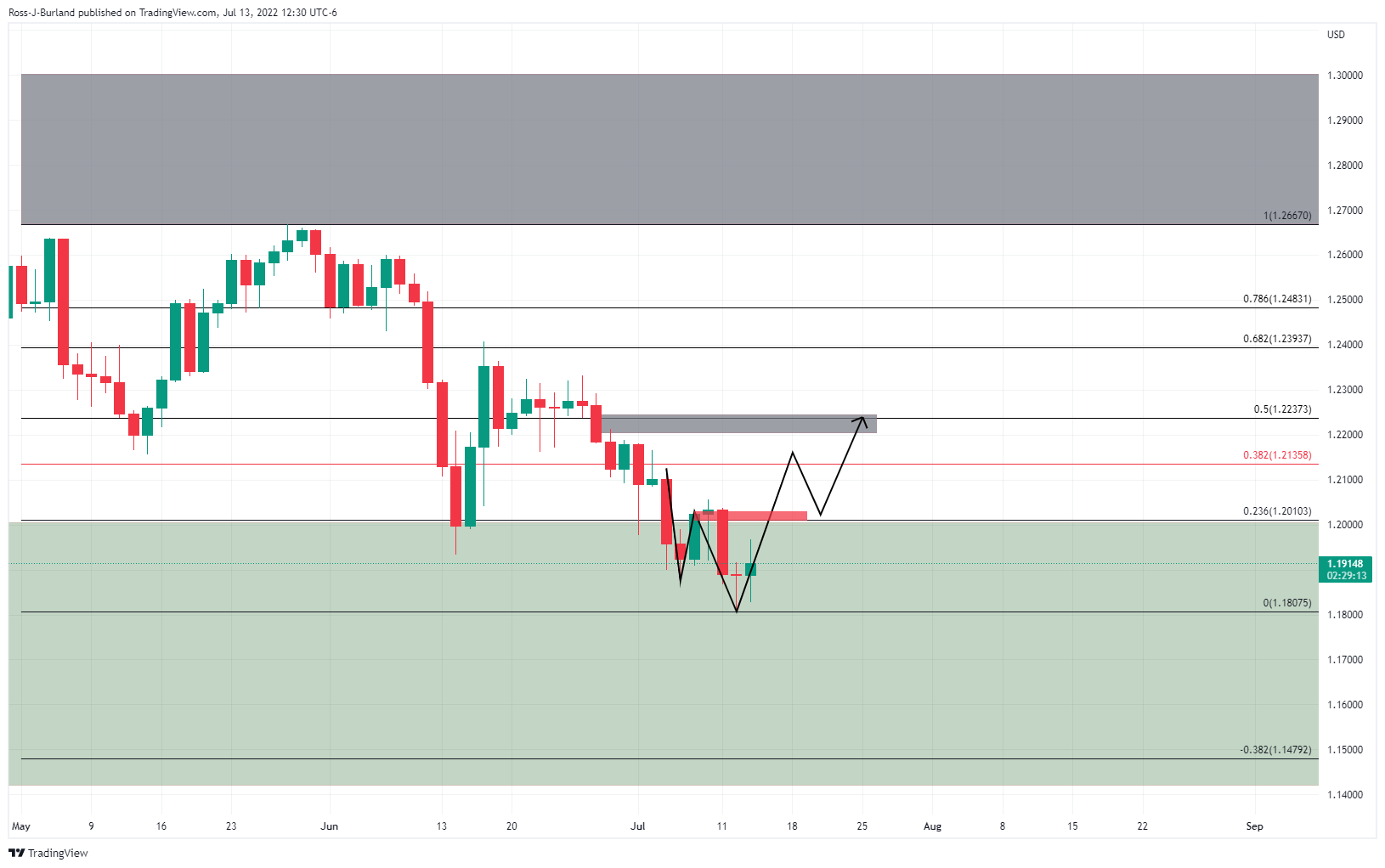