While the Bank of England (BoE) was the first of these two major central banks to begin the rate hiking journey, souring fundamentals in the UK and an increasing sense of urgency to calm soaring inflation in the US, has led us to this juncture. On Thursday, we could very well see a stark shift in the pace and size of future rate hikes for both regions as the market expects over 70 basis points to be added to the Fed funds rate later this evening, while the BoE is poised to hike by a comparatively low 25 bps.

The urgency for the FOMC to up the pace of rate hikes was confirmed last Friday when US CPI surprised to the upside, coming in at 8.6% vs 8.3% – rendering prior hikes somewhat ineffective when it comes to calming inflation. The phenomenally strong labor market in the US and soaring inflation certainly supports calls for an aggressive rate hike; However, recent warning from major retailers Walmart and Target around the susceptibility of the US consumer has left markets on recession watch.

An overly aggressive hike threatens to squeeze household incomes and place un-needed stress on debt laden companies, potentially placing the US on the path to recession, or worse, stagflation. Speaking of stagflation, the UK has been hit with soaring energy costs due to the ongoing war in Ukraine which necessitated fiscal support by way of a windfall tax. The fiscal support, while welcomed, doesn’t make the task of the BoE much easier as the mood music coming from the Bank points to a more gradual approach to normalization. The previous rate setting meeting saw members of the MPC judging risks to growth and inflation as “balanced”, relinquishing the need for continued, hawkish forward guidance.

There are a number of permutations that could arise over the next 48 hours so it may be prudent to consider the base case before mentioning various deviations.

Market Expectations: Fed to hike by 75 bps and BoE to hike by 25 bps.

Implied probabilities based off Fed funds futures lie closer to 75 bps than 50 bps while the BoE equivalent remains closer to 25 bps but remains elevated at 32 bps. 75 bps from the Fed could suggest a bullish continuation on the dollar, after the dust has settled, while 25 bps from the BoE could be viewed as a hawkish disappointment and lead to a lower move in GBP/USD.

The pair briefly breached the 1.2000 mark (see the monthly chart) yesterday before pulling back as we head into the FOMC meeting. The RSI has retreated from being ever so slightly in oversold territory – raising concerns about a lasting recovery. The prior dip into oversold territory (red circle) was invalidated, meaning that we could still see a re-test of 1.2000 in the coming days.

Near-term resistance comes in at 1.2155 with 1.2250 a better indication for a deeper pullback. 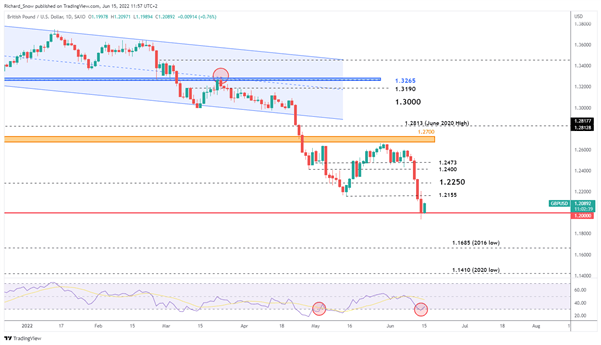 The monthly chart helps reveal the significance of the psychologically important 1.2000 level as it has acted as a pivot point in the past. 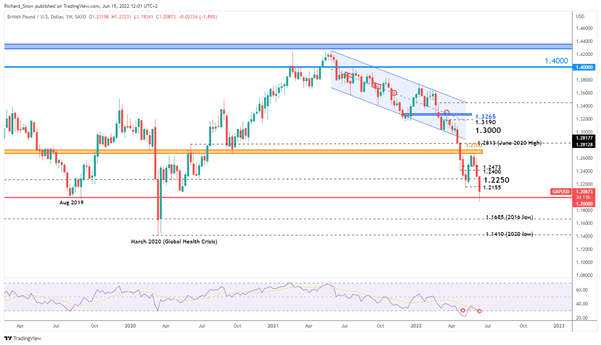 That being said, we could witness a 50 bps hike in the US as was previously suggested by Jerome Powell and other FOMC members. This is clearly well below current market expectations and runs the risk of sending the dollar lower as the ‘buy the rumour, sell the fact’ mentality takes hold. As for the Bank of England, anything other than 25 bps would be a shock but markets are likely to be more interested in the vote split of the decision for further insight into their overall appetite for higher interest rates.

Major Risk Events in the Next 7 Days

Forex traders have certainly been blessed with all that is on offer this week but the main risk events include the FOMC and BoE decisions with an honorable mention for US retail sales. Previously I mentioned the worsening state of the US consumer which could be reflected in the data. Last week a University of Michigan consumer sentiment survey dropped significantly from 58.4 to 50.2 as consumers’ economic outlook and prospects soured drastically. Next week, UK CPI could be the judge as to whether the BoE decision was justified.