It’s been a two-way street in global equities, with a rally in the US session vs risk-off day overnight with European bourses pressured overall. The euro was impaired by poor local PMIs which lifted the US dollar index, DXY, to a 104.78 peak that pressured peers in turn, including the pound.

UK economy and BoE in focus

However, yesterday’s UK inflation print coupled with today’s UK PMI outcome underpins sentiment that the UK’s central bank, the Bank of England, BoE, is on track to hike by 50bps rate hike in the next meeting. The Bank of England is watching for signs that the recent jump in inflation, which hit a 40-year high of 9.1% in May, might turn into a permanent problem for the British economy.

However, observers will argue that Britain’s economy is showing signs of stalling as high inflation hits new orders and stores report levels of concern that normally signal a recession. This was evident in today’s S&P Global’s Purchasing Managers’ Index (PMI), that was covering services and manufacturing firms. The data showed companies were raising pay and passing higher costs on to clients, which is a concern for the Bank of England.

The PMI’s preliminary composite index held at 53.1 in June, above the median forecast of 52.6 in a Reuters poll of economists and unchanged from May. But the PMI’s measure of new orders effectively stagnated as it fell to 50.8, the lowest in over a year. Factory orders dipped below the 50.0 growth threshold to 49.6.

“The economy is starting to look like it is running on empty,” Chris Williamson, a chief business economist at S&P Global Market Intelligence, said, adding that the economy was likely to show a fall in output in the second quarter that could deepen in the third quarter. “Business confidence has now slumped to a level which has in the past typically signaled an imminent recession,” he also explained. Growth was being propped up by previously placed orders. Manufacturers had reported especially weak demand for exports, and service firms were seeing their post-lockdown bounce reverse as the cost of living rose, Williamson explained further.

Moreover, the PMI’s business expectations index fell by 4.6 points in June, the largest monthly decline since the start of the COVID-19 pandemic, with manufacturers and service providers both reporting their lowest business optimism levels since May 2020.

On the upside, job creation was the strongest in three months, in the latest sign of the strength in the labor market.

”The UK is in danger of being the slowest-growing major advanced economy next year, with the highest inflation rate and the biggest current account deficit,” Kit Juckes at Societe Generale said.

”That’s quite a collection, and it represents a clear threat to the pound. Sentiment is already poor and there are plenty of speculative shorts out there too, but further weakness is likely. Whether it falls more as the US dollar continues to rise, or under-performs a recovering euro, it will struggle. Longer-term, we will see sterling make new trade-weighted lows.”

Meanwhile, the BoE said last week it was ready to act “forcefully” if it saw signs of persistent inflation pressures, suggesting it might raise interest rates by more than its standard quarter-point increase despite fears of a recession. Overnight index swaps are continuing to price in 50bp moves by the BoE at the next 3 meetings. This lays out a path that would leave Bank Rate above 3% by year-end.

On the charts, this could see the pound steady from the monthly support area and there are upside prospects in the near term so long as the market structure on the four-hour chart holds up.

The monthly chart above is concerning given the strong bearish bias in 2022. However, there are some bullish features on the nearer-term charts that are encouraging as follows: 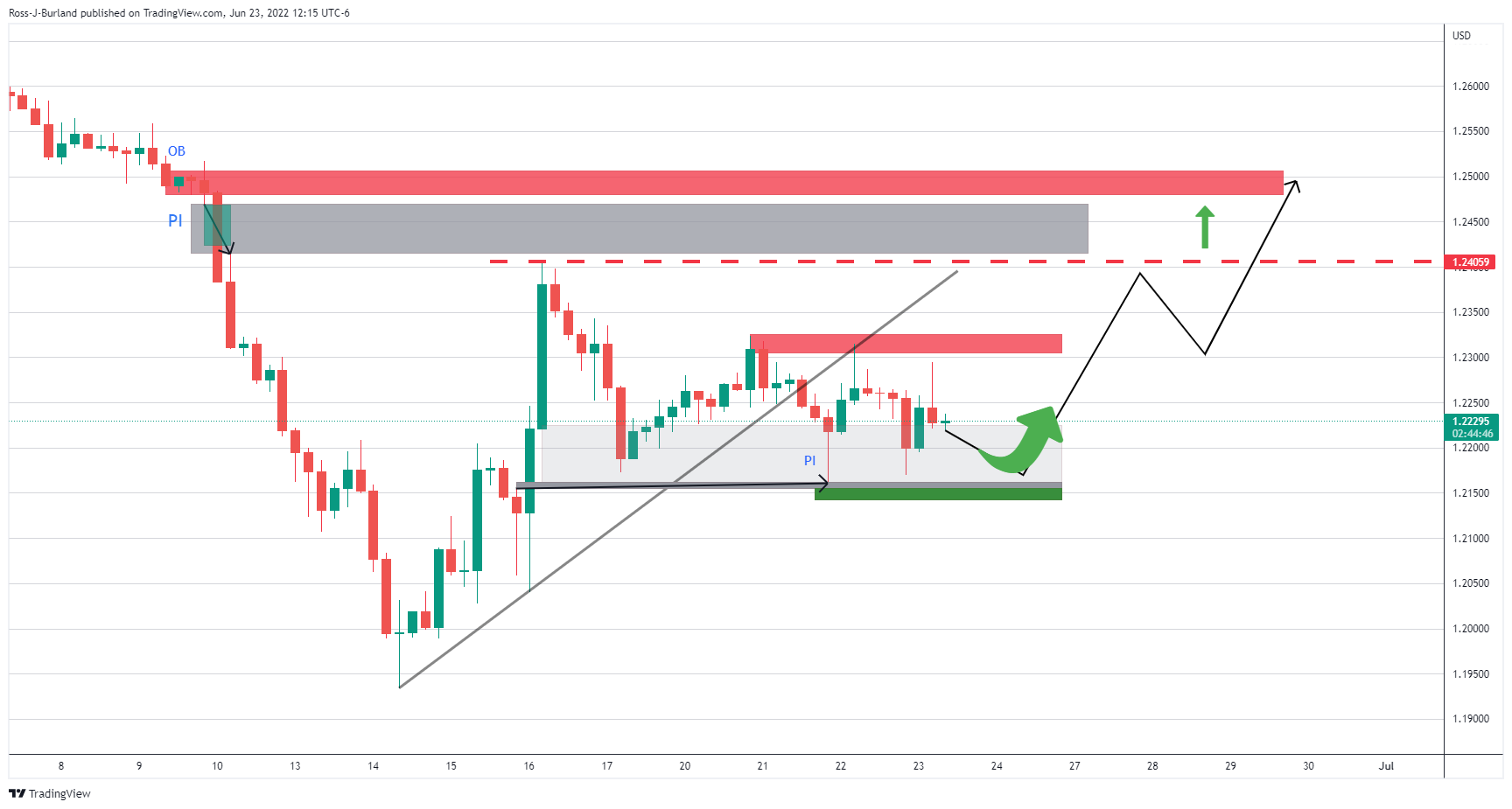 As illustrated, the price recently moved sideways out of an uptrend but has since stalled within a channel between 1.2160 and 1.2315. Should the bulls commit, then there will be prospects of a large area of ​​imbalance (PI) between 1.2469 and 1.2414 that could be mitigated giving way to chances of a move in to test 1.25 the figure thereafter, the highs o the order block (OB ). However, there is still a slight inefficiency of price to the downside to 1.2154 that could be mitigated first of all as a last defence. If the bears commit through there, then the market structure will be broken and the bias will shift bearish again.