A soaring USD, broken key tech levels and falling inflation expectations have exacerbated the sell-off in gold in recent days. Alongside this and as I pointed out last week, a death cross, which has now formed, had been looming and thus providing another bearish signal for gold. However, as I previously noted, I am typically sceptical of these indicators working consistently and despite the subsequent price action on this occasion, I still stand by that view. A death cross or golden cross should not be the sole reason to enter a trade, merely add to your current thesis as to why you are making that trade. For me, I have been bearish on gold for a whilewith the sharp rise in US real yields being a key factor, as well as the break through 1880 (Russia invasion/SWIFT sanction reaction level) further solidifying my view that we had peaked in gold.

Gold vs US 5Y Inflation Expectations

Gold Most Oversold Since August 2021

From a technical point, the break below 1760 was significant and will now represent resistance.While the catalyst for yesterday’s drop had been the overall better than feared ISM Non-Manufacturing PMI data. Given that gold has slipped into oversold conditions for the first time since August 2021, a bounce back to key resistance (1760) can be expected. That being said, on the downside, aside from mild support at 1720, the big area for bears is 1685-90. Looking ahead, the focus will remain on US data for the next 24hrs, most notably tomorrow’s jobs report where markets appear to be positioning for a soft report given the contractions in both the ISM Non-Mfg and Mfg PMI sub-components. 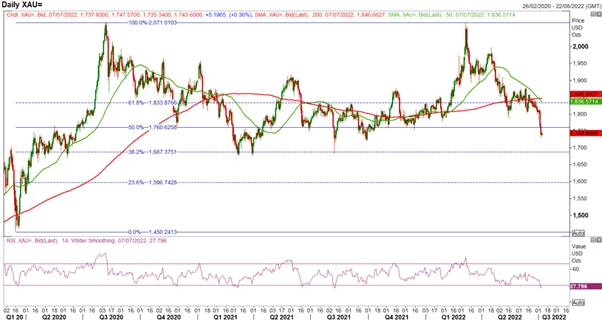