The dovish ECB is now almost certainly set to hike interest rates in July after numerous mentions of the anticipated rate hike by various governing council members over the last few weeks, with some even mentioning 50 basis points although this seems very unlikely. Now the Swiss National Bank (SNB) has also made mention of possible rate hikes to stem inflationary pressures leaving the Bank of Japan on its own. The Bank’s dovish stance places downward pressure on the Japanese Yen as interest rate differentials, among other major currencies currently hiking rates, widen.

High Impact US Data Under the Microscope Amid Recession Worries

In the absence of high impact data out of Japan, the US data is likely to attract a lot more attention after signs of economic fragility have surfaced in the United States. The Q1 2022 GDP contraction was the first sign of trouble followed by warnings from Walmart and Target about lower forecasted earnings as consumers shift towards cheaper alternatives and input costs continue to rise. The second estimate of the Q1 GDP data is out today at 12:30 GMT but any revisions are likely to be minor and are highly likely to reverse the fact that the economy contracted in Q1.

In addition, tomorrow, the Michigan Consumer Sentiment survey is likely to confirm a rather sizeable drop in individuals’ personal economic prospects, as well as the general state of the economy in the near term. Staying with Friday we also have the core and headline measures of Personal Consumption Expenditure index (the Fed‘s referred measure of inflation) with the core reading anticipated to provide a second successive print lower.

Last week in an interview with the Wall Street Journal, Jerome Powell mentiond “This is not a time for tremendously nuanced readings of inflation. We need to see inflation coming down in a convincing way. Until we do, we’ll keep going.” This implies that the anticipated 50 basis point hikes in both the June and July meetings are set to go ahead irrespective of a slightly cooler inflation print.

The 130 level in USD/JPY seems like a distant memory now as price action continues lower, mainly as a result of a softer dollar (recession concerns). Previously we looked at the prior low of 126.95 for an indication of bearish continuation. However, price action oscillates around this level which is yet to provide a solid close below with continued momentum. In residence, USD/JPY looks vulnerable to a move lower, in which case, the psychological level of 125.00 defaults to the most immediate level of support.

On the upside, there isn’t too much standing in the way of the 130 resistance level apart from 129.40, a prior high before advancing to 131.35. The RSI heads lower and has some room before price action presents signs of being oversold and the average true range indicator maintains elevated volatility levels for the pair which increases the risk of two-sided price action swings. 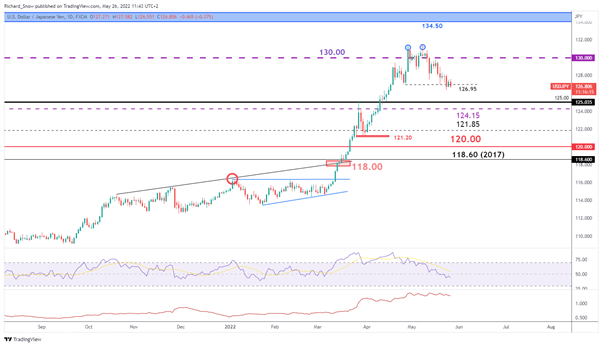