Is the Current Bullish Momentum in EUR/USD Sustainable?

The euro has been boosted in recent times by ECB interest rate expectations as rates markets now anticipate over 100 basis points of tightening into year end, starting with the first hike in July. The timing of the ‘lift-off’, in July, has been well communicated by doves and hawks within the ECB’s governing council and so it just remains a question of by how much.

However, due to the well telegraphed preference to hike in July, markets have already priced in this information, leaving little room for further currency appreciation resulting from rate hike expectations. Additional risks in the form of the prolonged issue around the Northern Ireland Protocol (Post-Brexit arrangement concerning the movement of goods from the UK to the EU) and challenges faced by EU member states around the Russian oil embargo, remain.

On the US front, It is a way to soon to assume the dollar will remain softer for longer. Yes, we have seen a reduction in Fed hike odds from pricing at 200 bps into the year end, to just under 180. However, persistent inflation keeps the Fed’s path very much on track while geopolitical uncertainty (Russia/Ukraine/China) drags on. Jerome Powell mentioned in an interview with WSJ that the Fed is not looking at nuanced detail in the data to suggest inflation is cooling and that a drastic decline in the level of prices is required to alter the Fed’s current rate of tightening.

From a positioning perspective, the dollar has come off quite a bit, resulting in an opportunity to re-join the longer-term uptrend at better levels.

EUR/USD comes up against near term resistance via the prior low of 1.0757 which coincides with the 50 SMA, currently keeping prices at bay. The next level of resistance appears at 1.0805 and the underside of the long term trendline from 2017.

The steady rise in EUR/USD has seen a reduction in net longs as traders exit longs and shift positioning closer to the short side. The contrarian hint indicator at a bullish continuation in price action as retail traders as a whole, shift out of longs and in to shorts. 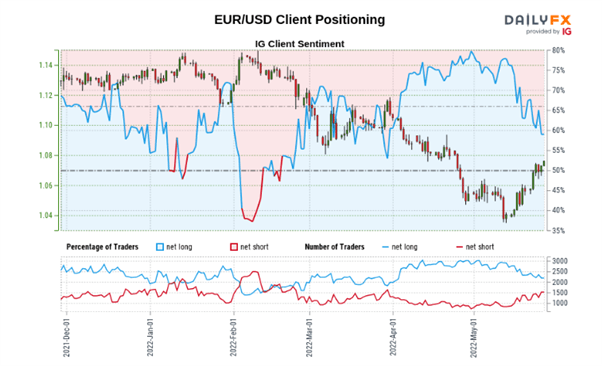 Core inflation in the eurozone is followed by ISM manufacturing and services data for the US which will be monitored closely for any worsening in the state of the US economy as recession concerns mount. Finally, on Friday we have the US non-farm payroll data.