The New Zealand Dollar bolted after the Reserve Bank of New Zealand (RBNZ) raised the official cash rate (OCR) 0.50% to 2.0%, as anticipated.

The Kiwi overcame pre-meeting weakness on the decision. It comes at a time when the market is reducing the amount of rate hikes that the Federal Reserve will be required to make to combat their inflation woes.

The RBNZ is looking to control rampaging inflation in the aftermath of extremely loose fiscal and monetary policy. Today’s hike has seen the cash rate go from a pandemic low of 0.25% to 2.0%.

Year-on-year New Zealand CPI is running at 6.9% to the end of the first quarter, the highest in 30 years. The latest unemployment rate of 3.2% for March is at multi-generational lows.

A fortnight night ago, food price inflation for the month of April came in at 0.1% against a previous reading of 0.7%. This gives an annual read of 6.4% for food inflation at the retail level, down from the prior 7.4%, potentially indicating that tighter monetary policy might be impacting prices.

Unfortunately, New Zealand, like Australia, only delivers CPI quarterly and this leaves the RBNZ somewhat in the dark on the current level of price pressures within the economy.

It also makes it difficult for them to gauge the response to their actions thus far. The next RBNZ monetary policy meeting is 13th July. Second quarter CPI will be released 17th July.

The result is that it’s possible that the next rate decision from the RBNZ could be the wrong one, regardless of what they do, through no fault of their own.

NZD/USD has bounced off a 2-year low of 0.6217 and proceeded to move above a descending trend line earlier this week.

On that rally it has crossed above the 10- and 21-day simple moving averages (SMA) which may suggest that bearish momentum has stalled. If the price goes below those SMAs, if could be a resumption of bearish momentum. 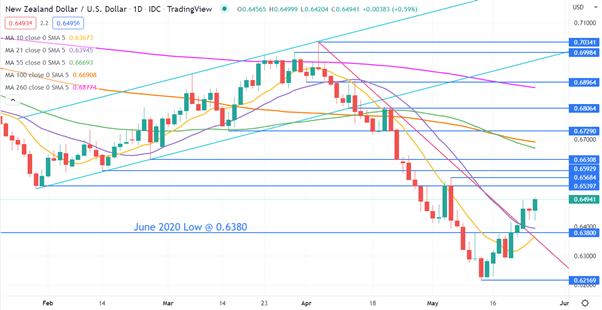