GBP/USD opened weaker this morning after yesterday’s vote of no-confidence kept the British Prime Minister Boris Johnson from immediate resignation. The vote which read 211-148 is not favorable for the party as it is clear that a large proportion seem to be at a disagreement which could sow the seed for forthcoming turmoil. The timing is unfortunate for pound sterling as the economy looks to be slowing and facing a potential recession. Recent key economic data from the UK has been showing signs of decline after last weeks poor manufacturing PMI print while we look forward to today’s services figure (see economic calendar below) for further guidance. On the contrary, the US economy has not let up with better than expected Non-Farm Payroll (NFP), ISM manufacturing PMI and consumer confidence releases allowing the Federal Reserve to maintain its hawkish narrative to combat rampant inflation.

Continued geopolitical stress from Russia and Ukraine remain a negative for GBP with the UK being geographically handicapped relative to the US exacerbating downside risks for the currency. Interestingly, money markets have been pricing at further rate hikes from the Bank of England (BoE)now roughly 148bps for 2022 as shown in the table below. I think this overexuberance from markets may again compound any downside movement for cable. 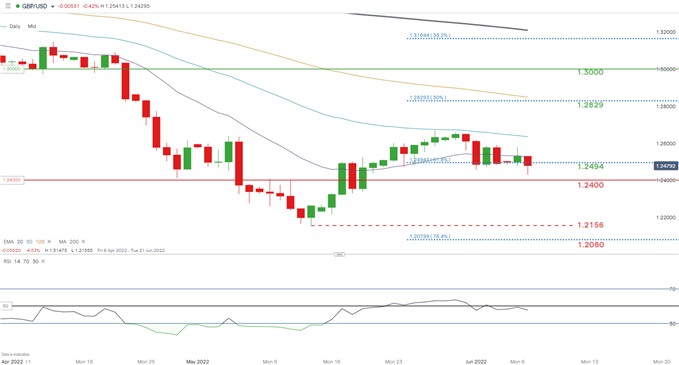 GBP/USD price action extends its consolidatory move around the 61.8% Fibonacci level at 1.2494. A break below will bring 1.2400 psychological zone into question with a further push opening up room towards resulting support at the May swing low (1.2156).

IG Client Sentiment Data (IGCS) shows retail traders are currently LONG on GBP/USDwith 68% of traders currently holding long positions (as of this writing). At DailyFX we typically take a contrarian view to crowd sentiment however, recent changes in long and short positioning result in a mixed bias.