The Swiss National Bank (SNB) have thus far adopted a fairly mild/dovish approach as the economy had maintained a good pace of recovery. First-quarter GDP expanded to 0.5%, beating the 0.3% median forecast. This was largely attributable to a rebound in exports as manufacturing expanded as well optimism for a continued leaving recovery.

Since then, we have had Russia’s Feb. 24 invasion of Ukraine which is having a material impact on Swiss economic data. Among the most concerning is obviously inflation, as the SNB finally begins to grapple with similar issues faced by the rest of Europe.

These developments have led to money markets looking to a potential rate hike this week with roughly 20 basis points priced in at the moment. The current rate of -0.75% remains among the world’s lowest.

The Swiss economy is currently experiencing its highest inflation rates since 2008, with a gradual increase seen since these highs were first breached in January. January saw annual inflation of 1.6% with the subsequent months increasing to post figures of 2.2%, 2.4%, 2.5% and most recently May’s number of 2.9%. An indication that any hope of plateauing inflation to be a dream rather than the stark reality.

As its global peers adopt a tightening policy, the SNB should avoid following suit we could see a price action similar to the Japanese Yen for the Swiss Franc.

What is the position of the SNB (Swiss National Bank)?

Investors have been keeping a close eye on developments at the SNB regarding policy changes. Vice Chairman Fritz Zurbruegg indicated that the SNB would need to act if faster inflation were to persist for a longer period.

Zurbruegg expressed his belief that a large part of inflation is down to energy prices, yet he doesn’t expect the economy to slow any further. When pressed on stock volatility, he also indicated his belief that the majority of banks have a large enough capital buffer to cover any shocks.

It’s the outlook that will matter for SNB Chairman Jordan and his colleagues. While they predicted in March that inflation would be 0.9% next year and in 2024, the president sounded the alarm last month, declaring that the SNB sees the risk of “second-round effects”. 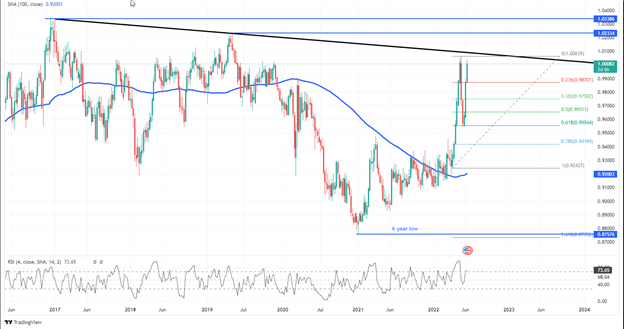 USDCHF has breached parity for a second time following May’s breach. Mays high of 1.0066 is in danger as a bullish dollar this week has seen the pair gain over 160pips thus far since bouncing of the 61.8 Fibonacci level as seen in the chart above. The Descending trendline (drawn from January 2017 highs of 1.03415) will come into play should the US dollar maintain its bullish nature post FOMC meeting.

We currently trade well above the 100-day Daily SMA, while the RSI currently indicates overbought conditions. As much as the Technicals might support the idea of ​​lower prices on the pair, this will depend on the outcome of both the Federal reserve meeting as well as the SNB rate decision tomorrow.

Should the USD strengthen on the back of the SNB and FED meetings a break of the descending trendline will open up the possibility of a retest of resistance levels at 1.02300 and the 1.03400 area. Alternatively, a rejection of the trendline may lead to a decline in the pair opening up a retest of support areas around 0.9890 and 0.9800, respectively.

The SNB rate has been at -0.75% for more than seven years as policy makers worked against a haven currency that they long called “highly valued” or at times “overvalued.”

The question is how far officials, while a close eye on the level of franc, want to reposition their policy bias to dangers of inflation just as reflecting the euro area plans increases in borrowing costs too.

The inflation outlook is not quite the same as the US or the Euro zone, so they do have a bit more time. This could be the reason economists (Reuters Poll) seem to agree on a rate hike in September. What would be surprising though is if the SNB really did change rates at scheduled decision which would be out of character as evidenced by the policy moves in 2011, 2014 and 2015.

This could make the meeting one of the most interesting central bank meetings of the week for once. It is as they say an extremely Close-Call.