The euro has continued to depreciate against the dollar after last week’s surprise US inflation beat that added to the Fed‘s hawkish narrative. The week ahead includes several high impact events with focus on the Fed’s interest rate decision on Wednesday.

Money markets are unsurprisingly pricing in a 50bps hike (see table below) which should keep the dollar buoyant against the euro heading into the rate announcement.

There has been much talk around the challenge for the ECB regarding periphery bonds and the euro. Periphery bonds relate to the so called ‘non-core’ nations representing the EU such as Spain or Italy as they carry higher bond yields along with more volatile spreads. The gap/spread between Italian bonds and the benchmark German bond are increasing as fears around rising interest rates will make debt obligations harder to meet. Navigating a weakening euro with the periphery banks conundrum requires a fine balancing act by the ECB to maintain order in the eurozone. 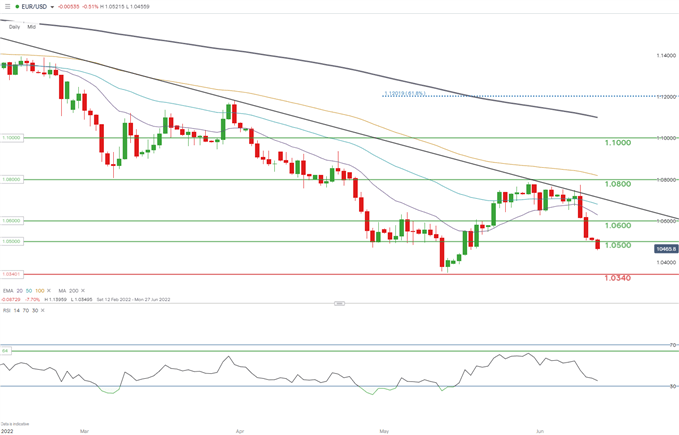 Price action on the daily EUR/USD chart above shows bears taking the pair through the psychological zone. 1.0500 zone, opening up room for a retest of the January 2017 swing low at 1.0340. It is difficult to see upcoming euro strength with the current US backdrop favoring the Fed front loading rates as inflation does not seem to be abating.

IGCS shows retail traders are currently LONG on EUR/USDwith 67% of traders currently holding long positions (as of this writing). At DailyFX we typically take a contrarian view to crowd sentiment however due to recent changes in long and short positioning we arrive at a mixed bias.