On Tuesday, US Treasury Secretary Janet Yellen and Japanese Finance Minister Shunichi Suzuki agreed to work together to tackle surging energy and food prices alongside undesirable volatility in the foreign exchange market.

It’s no secret that the yen has depreciated significantly, seeing sharp moves lower against G7 currencies. The US dollar on the other hand has experienced quite the opposite and has recently reached levels not seen since 2002.

G7 nations are encouraged to follow a free-floating exchange rate regime, meaning that prices are determined by demand and supply, as opposed to allowing countries to directly intervene in the FX market whenever seeking to strengthen or weaken the local currency. However, the G7 agrees that excess volatility and disorderly moves can hurt economic and financial stability, as Japan’s Suzuki mentioned, “we are carefully watching the market with a high sense of urgency”.

USD/JPY levels have been well-defined as price action hovered around the prior high of 137. However, yesterday we saw the dollar extend its gains once more, sending USD/JPY past the October 1998 high of 136.89. Since then, the pair trades lower but there still remains a fair amount of USD focused event risks that could support the dollar over the near-term (see economic calendar below).

The monthly chart helps identify any reference points where price action has pivoted before. Considering the recent move higher in USD/JPY, we could be looking at a push towards 139.90. A strong upside surprise in CPI data tomorrow could push the pair higher as we count down to the FOMC meeting on the 27th. 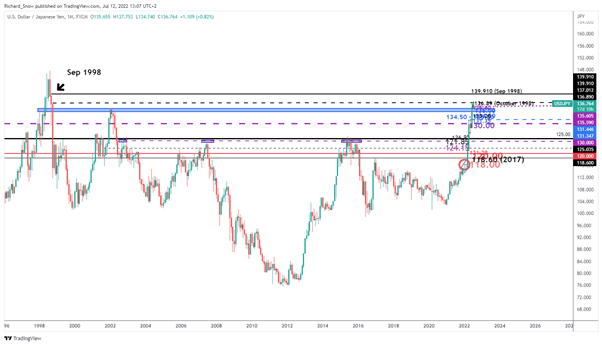 Japanese PMI data surprised to the upside but the 9.2% figure is the lowest reading since January this year. US PPI data is due on Thursday, forecast to print inline with the May 0.8% figure. However, the most important scheduled event risk this week appears in the form of US CPI. Should the forecasted number of 8.8% materialize it would mark a return to the trend of higher inflation prints after April’s relative drop – potentially spurring USD/JPY.

Honorable mentions, at least as far as the US growth story is concerned, goes to US retail sales data and the University of Michigan consumer sentiment report. This version of consumer sentiment dropped into a record low, stretching all the way back to the 1970s, and is anticipated to break into sub 50 territory. Even if we are to see downside surprises in these data prints, it is highly unlikely to have any bearing on the Fed and its aggressive pace of policy normalization. Jerome Powell has mentioned that we could see some pain in the economy but that inflation (price stability) remains the Fed’s number one priority. 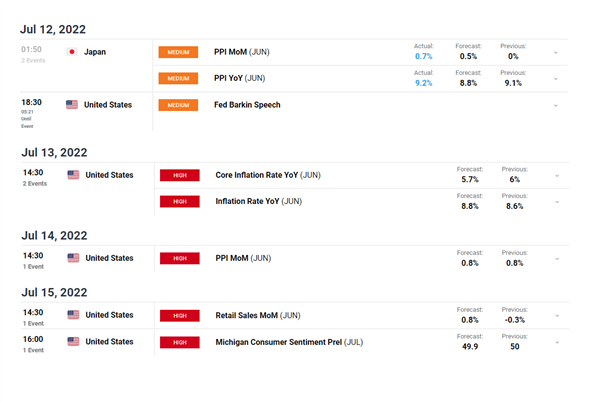