USD/CAD trades to a fresh monthly low (1.2535) as it gives back the rebound from the end of last week, and data prints coming out of Canada may keep the exchange rate under pressure as employment is expected to increase for the fourth consecutive month .

USD/CAD struggles to hold its ground after showing a limited reaction to the better-than-expected US Non-Farm Payrolls (NFP) reportand the exchange rate may continue to give back the advance from the yearly low (1.2403) as it trades below the 200-Day SMA (1.2658) for the first time since April.

Looking ahead, the update to Canada’s Employment report may influence USD/CAD as the economy is anticipated to add 30.K jobs in May, and a further improvement in the labor market lead to a bullish reaction in the Canadian Dollar as it encourages the Bank of Canada (BoC) to further normalize monetary policy over the coming months.

The ongoing expansion in employment may push the BoC to deliver another 50bp rate hike as “the Governing Council continues to judge that interest rates will need to rise further,” and it seems as though the central bank will focus on taming inflation as “the Governing Council is prepared to act more forcefully if needed to meet its commitment to achieve the 2% inflation target.”

It remains to be seen if the BoC will adjust its exit strategy at its next rate decision on July 13 as Governor Tiff Maclem and Co. are slated to update the quarterly Monetary Policy Report (MPR), and the fresh projections coming out of the central bank may warn of a tightening cycle as “The Canadian economy is moving into excess demand.”

Until then, the bearish momentum underlying USD/CAD may persist as the Relative Strength Index (RSI) reflects a downward trend, and a further decline in the exchange rate may fuel the recent flip in retail sentiment like the behavior seen earlier this year. 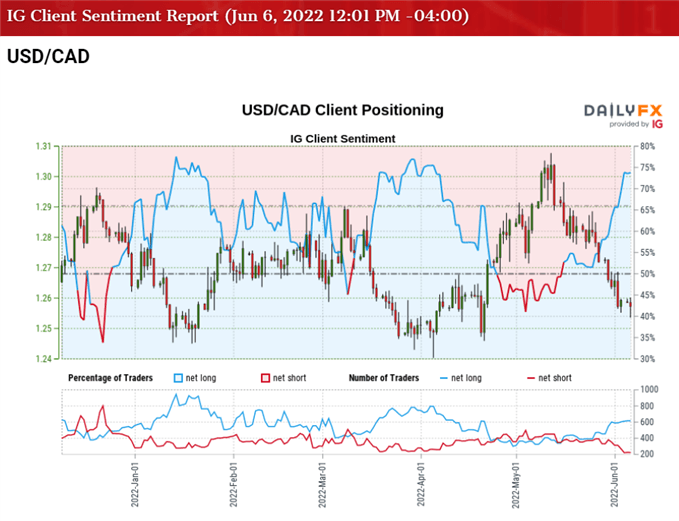 The IG Client Sentiment report shows 66.20% of traders are currently net-long USD/CAD, with the ratio of traders long to short standing at 1.96 to 1.

The number of net-long traders is 1.31% higher than yesterday and 22.49% higher from last week, while the number of net-short traders is 34.89% higher than yesterday and 19.75% lower from last week. The rise in net-long interest has fueled the shift in retail sentiment as 49.86% of traders were net-long USD/CAD last month, while the decline in net-short position comes as the exchange rate trades to a fresh monthly low (1.2535).

With that said, another uptick in Canada Employment may push USD/CAD to fresh monthly implement lows as it puts pressure on the BoC to higher interest rates, and the exchange rate may continue to give back the advance from the yearly low (1.2403) as it trades below the 200-Day SMA (1.2658) for the first time since April. 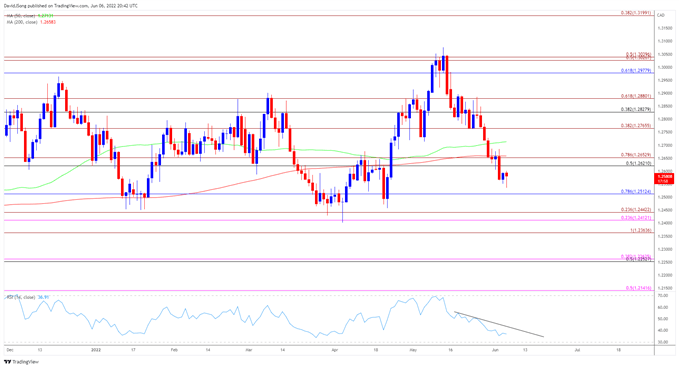