USD/CAD clears the June range as it trades to a fresh yearly high (1.3083), and looming developments in the Relative Strength Index (RSI) may point to a further appreciation in the exchange rate if the indicator pushes into overbought territory for the first time in 2022.

The sharp advance in USD/CAD has materialized following the failed attempts to push below the 50-Day SMA (1.2834), and the exchange rate may start to track the positive slope in the moving average as the Federal Reserve normalizes monetary policy faster than its Canadian counterparts.

As a result, the employment reports coming out of the US and Canada may do little to derail the recent advance in USD/CAD as the Federal Open Market Committee (FOMC) and Bank of Canada (BoC) remain on track to implement higher interest rates , and the exchange rate may continue to trade to fresh yearly highs in July with Chairman Jerome Powell and Co. expected to deliver another 75bp rate hike later this month.

Meanwhile, the BoC may opt for a 50bp rate hike as “the Governing Council continues to judge that interest rates will need to rise further,” but it remains to be seen if Governor Tiff Maclem and Co. will adjust the forward guidance for monetary policy as the central bank is slated to release the updated Monetary Policy Report (MRP) at its next meeting on July 13.

Until then, USD/CAD may largely track the weakness in commodity bloc currencies as the 50bp rate hike from the Reserve Bank of Australia (RBA) does little to shore up the Australian Dollar, but the tilt in retail sentiment may persist as positioning appears to be mirroring the behavior seen in May. 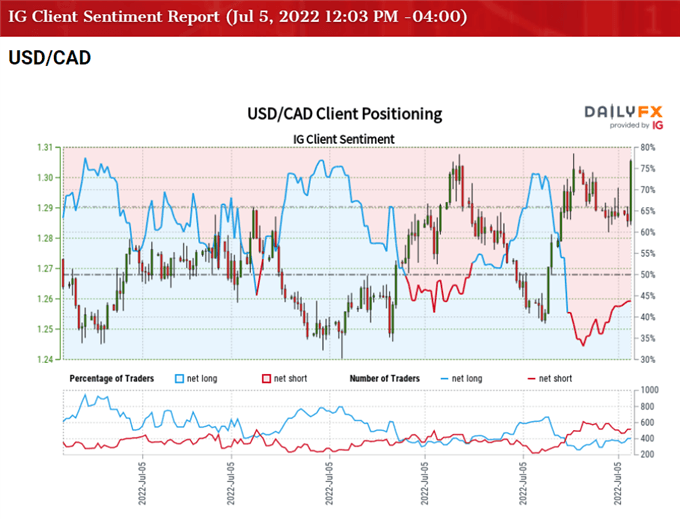 The IG Client Sentiment report shows 41.53% of traders are currently net-long USD/CAD, with the ratio of traders short to long standing at 1.41 to 1.

With that said, USD/CAD may mimic the price action from May if the recent advance fails to push the Relative Strength Index (RSI) into overbought territory, but a move above 70 in the oscillator is likely to be accompanied by a further advance in the exchange rate like the price action seen during the previous year. 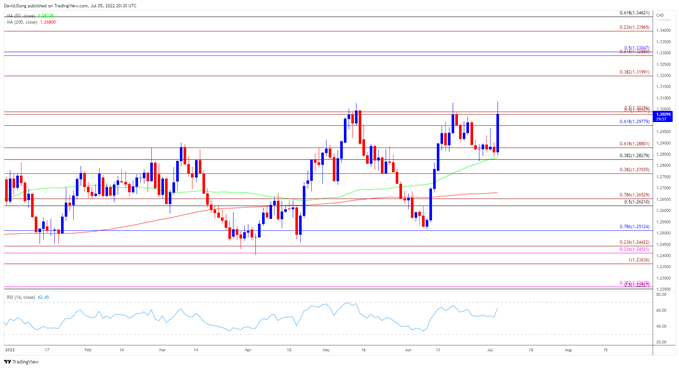