USD/CAD snaps the series of lower highs and lows from the start of the week even as Canada’s Consumer Price Index (CPI) climbs to its highest level since 1983, but the limited reaction to the Federal Reserve’s semi-annual testimony may lead to a near-term correction in the exchange rate as the Relative Strength Index (RSI) reverses ahead of overbought territory.

USD/CAD managed to clear the May high (1.3077) to register a fresh high (1.3079) in June, but the exchange rate may largely mimic the price action from last month as the recent rally fails to push the RSI above 70.

As a result, the advance from the June low (1.2518) may continue to unravel as the testimony from Fed Chairman Jerome Powell generates a limited reaction in foreign exchange markets, and swings in investor confidence may sway USD/CAD ahead of the next Federal Open Market Committee (FOMC) interest rate decision on July 27 as the central bank head warns that it will be “very challenging” to foster a soft-landing for the US economy.

Meanwhile, the update to Canada’s CPI may encourage the Bank of Canada (BoC) to take additional steps to combat inflation as the headline reading climbs to 7.7% from 6.8% per annum in April, with the core rate exhibiting a similar dynamic as it widens to 6.1% from 5.7% during the same period.

Evidence of persistence inflation may push the BoC to normalize monetary policy at a faster pace as the central bank is slated to release the updated Monetary Policy Report (MPR) at its next meeting on July 13, and it remains to be seen if Governor Tiff Maclem and Co. will alter the forward guidance for monetary policy as “the Governing Council is prepared to act more forcefully if needed to meet its commitment to achieve the 2% inflation target.”

Until then, USD/CAD may face a larger correction amid the recovery in commodity bloc currencies, and a decline in the exchange rate may alleviate the recent flip in retail sentiment like the behavior seen during the previous month. 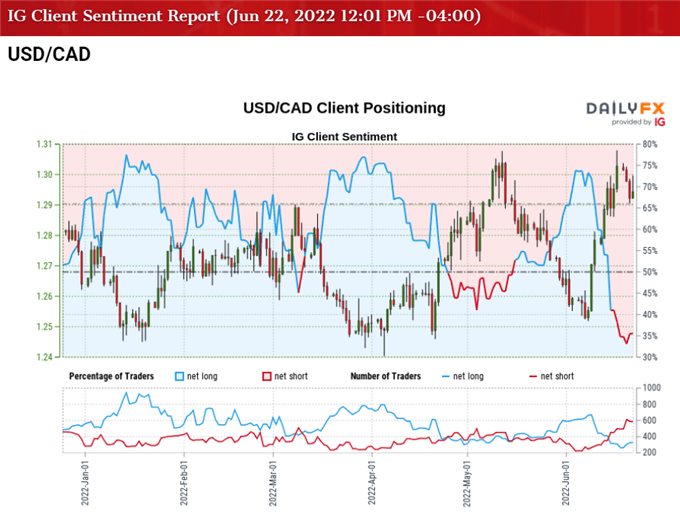 The IG Client Sentiment report shows only 38.27% of traders are currently net-long USD/CAD, with the ratio of traders short to long standing at 1.61 to 1.

The number of net-long traders is 26.99% higher than yesterday and 2.80% higher from last week, while the number of net-short traders is 5.73% lower than yesterday and 28.42% higher from last week. The rise in net-long position comes as USD/CAD snaps the series of lower highs and lows from the start of the week, while the jump in net-short interest has fueled the recent flip in retail sentiment as 52.85% of traders were net -long the pair last week.

With that said, the commodity bloc currencies may stage a larger recovery over the coming days amid the improvement in risk appetite, and USD/CAD may continue to give back the advance from the monthly low (1.2518) as the RSI reverses ahead of overbought territory. 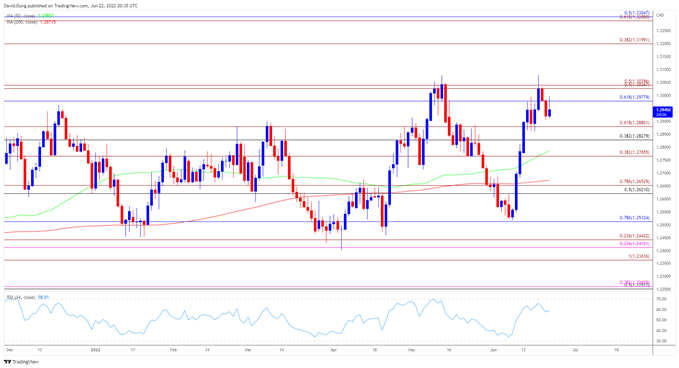