It was FOMC monetary policy decision week once again, and it looks like we got a slightly different tone from Powell and company that sparked a move away from the US dollar.

US crude exports gain 21% to hit record high; likely a result of Europe’s move away from Russian oil – EIA

South Korea’s manufacturing outlook came in at 80 for August vs. 82 in July, the lowest level since Jan. 2021

Oil steadily rose back over $100/bbl this week as traders priced in lower odds of a production boost from OPEC+, likely to stay unchanged until September

The main event of the week was the latest monetary policy decision from the FOMC. And as usual, it looks like traders were mostly waiting on the sides in anticipation for a widely expected 75 bps interest rate hike.

This was characterized by relatively low volatility early this week across the broad financial markets. Probably the only significant move to speak on was oil’s strength, likely influenced by news of Gazprom cuts Nord Stream 1 gas flows to Europe on Monday. This also was possibly the driver for early week euro weakness as rising energy costs will likely continue to weigh on the fragile European economy.

Price action started to get more lively with the Fed’s monetary policy statement on Wednesday, after the FOMC raised the Fed funds target range to 2.25% – 2.50% as widely expected.

But it wasn’t until Fed Chair Powell’s speech following the statement that really got traders moving, specifically after toning down expectations of more aggressive tightening ahead. He said that while large increases could be appropriate, the FOMC will be data dependent going forward.

This development is in line with growing sentiment that the aggressive stance that global central banks have taken to tame extreme high inflation conditions may be softening, especially as we continue to see broad economic updates still pointing to an economic slowdown ahead.

The most notable data point was likely the weaker-than-expected advanced US GDP read on Thursday, coming in well below expectations at -0.9% for Q2 2022 and signaling a technical recession in the US

This argument of slow monetary policy tightening (or even reversing back to easing) is likely why we saw a higher move in risk assets, as well as a move lower in the US dollar and bond yields (which also likely contributed to a rise in dollar denominated assets). This sentiment seems to have continued into the weekend, despite another record inflation read from the Federal Reserve’s preferred inflation metric, the Core PCE price index, hitting new highs.

Dallas Fed Manufacturing Survey declined by 5 points to -22.6 in July

US consumer confidence dropped to its lowest level since Feb. 2021 as inflation bites

US weekly initial unemployment claims was 256K vs. 261K the previous week

Senate Democrats strike deal on the Inflation Reduction Act of 2022

UK Consumers borrowed an additional £1.8B in consumer credit in June

Sentix investor confidence slumped in July to -26.4 from -19.9 forecast

French industrial production stayed unchanged in May vs. projected 0.1% uptick

European Central Bank Governing Council member Ignazio Visco said on Thursday that there is a risk of recession in Europe, and that rate hikes going forward will likely be data dependent. 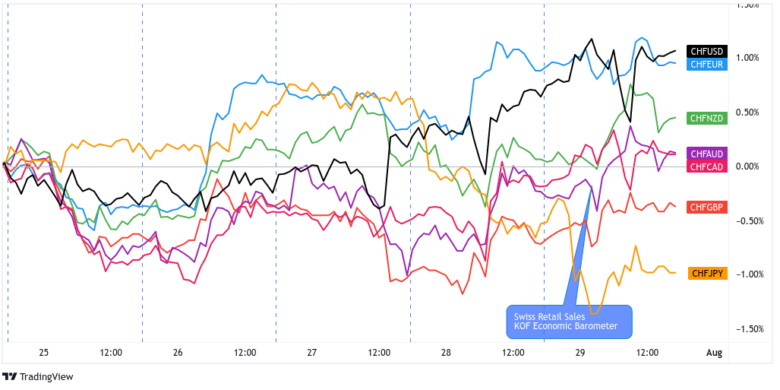 KOF Economic Barometer dips by 5.1 points to 90.1 in July

Australia’s retail sales momentum slowed from 0.9% to 0.2% in June

Bank of Japan board reshuffle brings in less dovish members

Japanese unemployment rate unchanged at 2.6% vs. expected improvement to 2.5%

Japan’s industrial production rebounded by 8.9% after the previous 7.5% decline

Japanese consumer confidence index slumped from 32.1 to 30.2 in July