Top Economic Events in Week Ahead

Deteriorating economic data from around the globe has had little, if any, impact on energy markets in recent weeks. Instead, focus has remained on the ebb-and-flow of demand coming out of China (as a result of the zero-COVID strategy), while concerns remain around the ability of OPEC+ to effectively increase energy supplies amidst a significant drop-off in Russian exports thanks to war in Eastern Europe.

That said, economic data releases related to energy markets – directly or indirectly – should elicit responses by oil prices, if only on a short-term basis:

– On Monday, June 13, April UK GDP figures are due at 6 GMT, as are April UK industrial production and manufacturing data.

– On Tuesday, June 14, the final May German inflation rate (HICP) and March UK jobs reports will be released at 6 GMT. June Eurozone and German ZEW economic sentiment indexes will be published at 9 GMT. The May US producer price index is due at 12:30 GMT.

– On Wednesday, June 15, May China industrial production and retail sales figures will be released at 2 GMT. May US retail sales will be published at 12:30 GMT, followed by April US business inventors and the June US NAHB housing market index at 14 GMT. The June Federal Reserve rate decision will be announced at 18 GMT.

– On Thursday, June 16, the June Bank of England rate decision will be announced at 11 GMT.

– On Friday, June 17, the June Bank of Japan rate decision will be announced at 3 GMT. The final May Eurozone inflation rate (HICP) is due at 9 GMT. May US industrial production figures will be released at 13:15 GMT, followed by the May US Conference Board leading index at 14 GMT.

Crude oil prices have a relationship with volatility like most other asset classes, especially those that have real economic uses – other energy assets, soft and hard metals, for example. Similar to how bonds and stocks don’t like increased volatility – signaling greater uncertainty around cash flows, dividends, coupon payments, etc. – crude oil tends to suffer during periods of higher volatility. The recent trend of diminished oil volatility has proved helpful in keeping crude oil prices elevated. 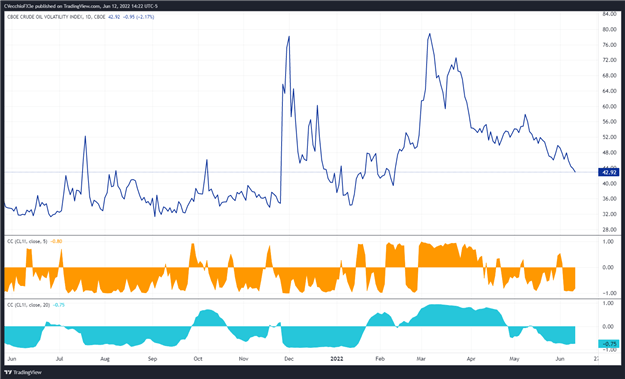 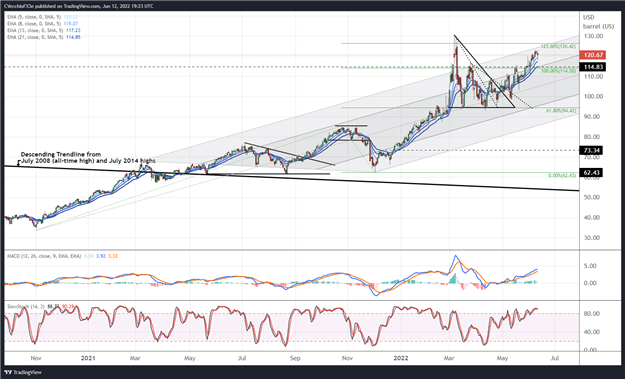 Crude oil prices continue to climb out of their recent two month-plus range, moving above the 100% Fibonacci extension level (114.20) measured from the November 2020 low, October 2021 high, and December 2021. Bullish momentum is firm, with crude oil prices above their daily 5-, 8-, 13-EMAs, and the EMA envelope is in bullish sequential order. Daily MACD continues to trend higher above its signal line, while daily Slow Stochastics are holding in overbought territory. As long as crude oil prices remain elevated above 114.20price action remains constructive towards the 123.6% Fibonacci extension at 126.42. 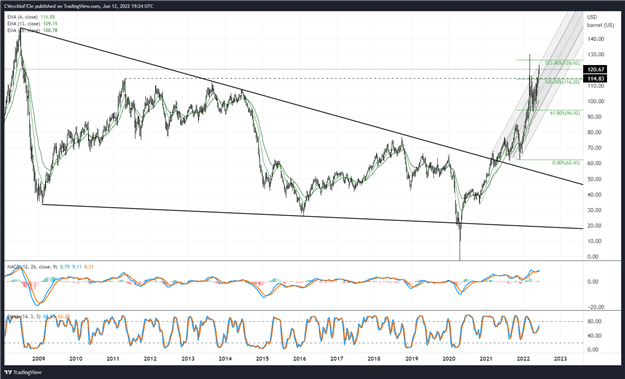 On the weekly timeframe, bullish momentum is likewise accelerating. Crude oil prices are back above their weekly 4-, 8-, and 13-EMA, and the EMA envelope remains in bullish sequential order. Weekly MACD is trending higher above its signal line again, and weekly Slow Stochastics are moving towards overbought territory. A bullish bias remains appropriate for crude oil prices for the foreseeable future. 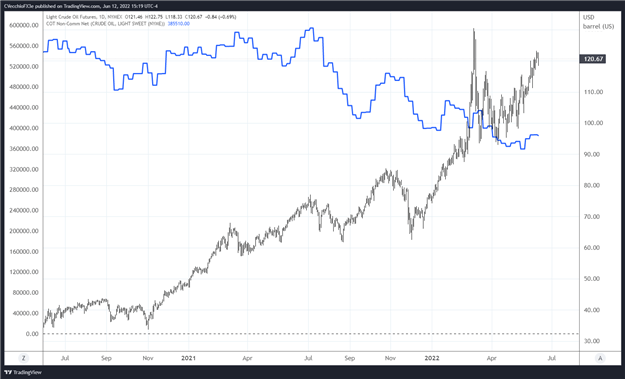 Next, a look at positioning in the futures market. According to the CFTC’s COT data, for the week ended June 7, speculators decrease their net-long crude oil futures positions to 385,510 contracts, down from the 386,845 net-long contracts held in the week ended May 31. Even though crude oil futures just reached a new 52-week high close, net-long positioning has not: the 52-week high for net-longs came in the second week of July 2021, when 594,465 contracts were held. 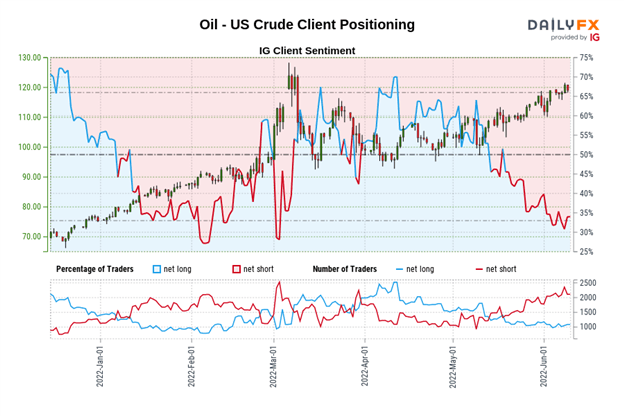 We typically take a contrarian view to crowd sentiment, and the fact traders are net-short suggests Oil – US Crude prices may continue to rise.

Yet traders are less net-short than yesterday and compared with last week. Recent changes in sentiment warn that the current Oil – US Crude price trend may soon reverse lower despite the fact traders remain net-short.