I’m seeing a couple of potential long plays on these forex pairs and a trend setup on gold!

Will these major inflection points hold or are we about to see breakouts?

Where my gold bears at?!

The precious metal has been trending lower since March this year, and it looks like another pullback to its descending channel resistance is in the works.

Will the trend carry on from there?

Technical indicators are suggesting that resistance levels are more likely to hold than to break. Stochastic is already in the overbought territory and looks ready to head south, so gold prices could follow suit.

Also, the 100 SMA is below the 200 SMA to confirm bearish vibes. Not only that, the gap between the moving averages is widening to reflect strengthening selling momentum.

Sellers might be waiting to hop in around the 61.8% Fib that’s right smack in line with the channel top, 200 SMA dynamic resistance, and a former support area. 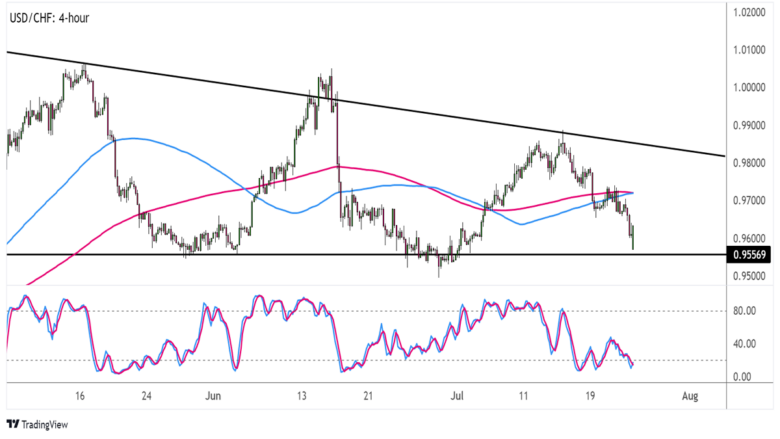 I’ve had this USD/CHF descending triangle on my radar for quite some time, and it looks like another test of support is due.

Better keep your eyes peeled for a bounce or a break!

If the bottom of the triangle around the .9550 minor psychological mark is able to keep losses in check, USD/CHF could recover back to the top around the .9800 handle.

Stochastic seems to be hinting that support would hold since the oscillator is hanging out in the oversold area, and a bit of bullish divergence can be seen with the higher lows.

However, if sellers bust through the triangle support, the pair might be in for a selloff that’s the same height as the chart pattern. That’s roughly 500 pips yo! 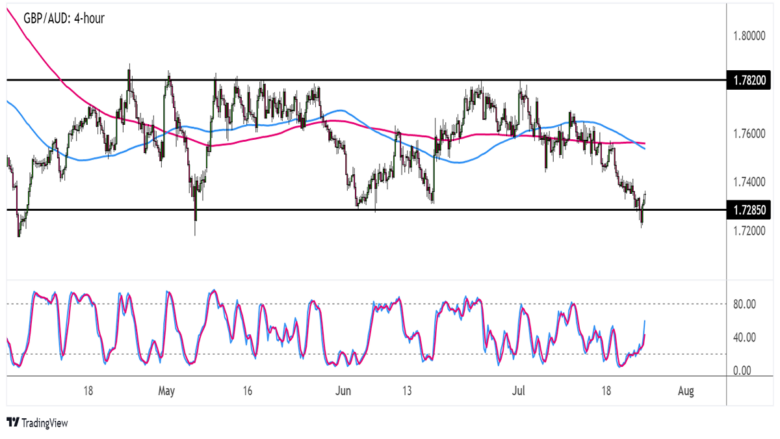 Last but certainly not least is this neat range setup on the 4-hour chart of GBP/AUD.

The pair is already testing the bottom of the range, and it looks like pound bulls are at it again!

If this bounce keeps up, GBP/AUD could make its way back to the top of the rectangle around the 1.7820 level or at least until the middle around 1.7500.

Stochastic is already heading north, so the pair might follow suit while buyers have the upper hand. It’s just that a bearish moving average crossover just took place, which means that sellers could still regain control.

Also note that these dynamic inflection points are situated right around the middle of the range, so the upside might be limited right here.

If pound bears (or Aussie bulls) are strong enough, a break of support could ensue and be followed by a drop that’s the same size as the range.