Gold is firmer despite a strong US dollar. The DXY index that measures the US dollar vs. A basket of currencies has rallied from a low of 102.152 to score a high of 103.23 so far on Thursday while the euro and US stocks gave up earlier gains after the latest policy announcement by the European Central Bank (ECB) that revised up its inflation projections “significantly” and unveiled plans for an interest rate hike in July.

The euro has dropped like a stone, falling over 0.8% already while the Dow Jones Industrial Average fell 0.45% after midday with the S&P 500 down 0.66% and the Nasdaq Composite 0.8% lower. Accordingly, gold is enjoying a safe-haven bid.

The ECB announced the end of QE and signaled a 25bp rate hike in July while its forward guidance also set out the prospect of sustained rate hikes, even opening the door for larger steps.

”If the medium-term inflation outlook persists or deteriorates, a larger increment will be appropriate at the September meeting,” the central bank said.

”This means that the ECB will only refrain from a 50bp step if the inflation outlook improves, which makes the larger hike look very likely,” analysts at ABN Amro explained.

However, a concern in markets came from the lack of any details for a plan about dealing with fragmentation concerns. The ECB has warned that the divergence between borrowing costs for different European countries hampers the execution of its monetary policy. Traders, as well as being concerned about lower growth but much higher inflation, took that as a green light to sell the euro and this pushed the greenback towards its second straight weekly gain and biggest weekly gain in five.

US inflation in focus

Meanwhile, traders will get a look at the latest reading on US inflation on Friday in the form of the May Consumer Price Index (CPI). The consensus forecast calls for a year-over-year inflation increase of 8.3%, unchanged from April. However, we could see more USD resilience in the very short-term ”especially if US core CPI surprises to the upside,” analysts at TD Securities argued.

”Tactically, we see growing signs of an adverse risk backdrop in the coming weeks, as US real rates and equity correlations wane further and the USD peels away from relative US equity performance.”

A stronger CPI ”reading could put downward pressure on risky assets as investors look for the Fed to remain aggressive in its fight against inflation.”

The Fed is scheduled to announce its next policy statement on Wednesday. A rate hike of at least 50 basis points from the central bank is already being priced in, according to CME’s FedWatch Tool.

Meanwhile, the analysts at TD Securities argued that ”a growing valuation gap between gold and real rates might eventually exacerbate the repricing lower in the yellow metal, despite it being attributed to both an undue rise in real rates given quantitative tightening, and to the still-massive complacent length in the yellow metal which has kept the prices elevated.”

The gold price is rounding off a correction in the 38.2% Fibonacci retracement area and a subsequent series of offers could see the bulls off, sending the price significantly lower in the coming days. A snowball effect would likely squeeze length and result in a downside continuation on the weekly chart. On the other hand, should the bulls manage to stay the course, the daily chart’s prospects opens the risk towards $1,920 (weekly 61.8% Fibo): 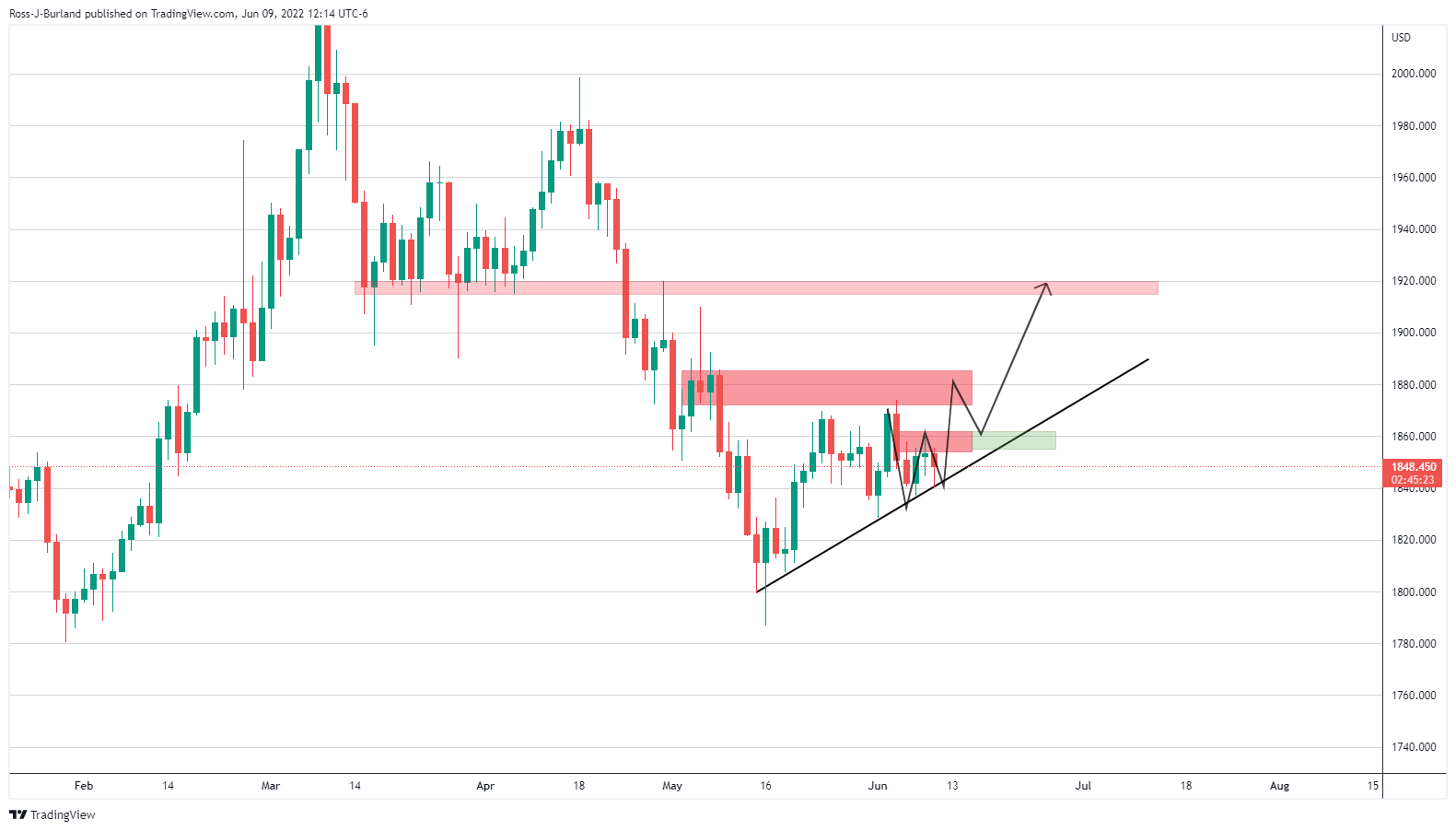