The price of the metal fell to a nine-month low last week despite risk-off vibes in equities and ongoing recession worries. This turned investors towards the US dollar instead of gold. The DXY index that measures the greenback vs a basket of currencies was touching 107.79, a 20-year high.

”Gold bugs are falling like dominoes, with selling flow spreading across participants as CTA trend followers join into the vacuum,” analysts at TD Securities said. ”A major capitulation event may be unfolding in gold, just a few days after our put spread expired (a strategist’s kryptonite!).”

”We see evidence that the steepest outflows from broad commodity funds since the Covid-19 crisis may be catalyzing a series of cascading liquidations from various speculative groups. This argues for substantial downside for gold in the coming sessions as participants are forced to sell in a vacuum.”

”We have cautioned that the substantial size accumulated by this cohort during the pandemic appears complacent. In a liquidation vacuum, these positions are now vulnerable,” the analysts argued.

However, from a technical standpoint, there are signs that the bulls could be on the verge of accumulating from the lows as the price corrects and stabilizes along the bottom of the sharp sell-off. More on that below.

Meanwhile, the week ahead will hold a key inflation report from the US as well as retail sales. Both of which have the ability to move the needle in markets in the build upon to this month’s Federal Reserve meeting.

The analysts look for Retail Sales to recover in June, following the series’ first contraction this year in May. ”Spending was likely aided by another firm showing in gasoline station sales and a rebound in the auto segment. We also look for another gain in the eating/drinking segment as consumers continue to transition away from goods. That said, control group sales likely fell again.” 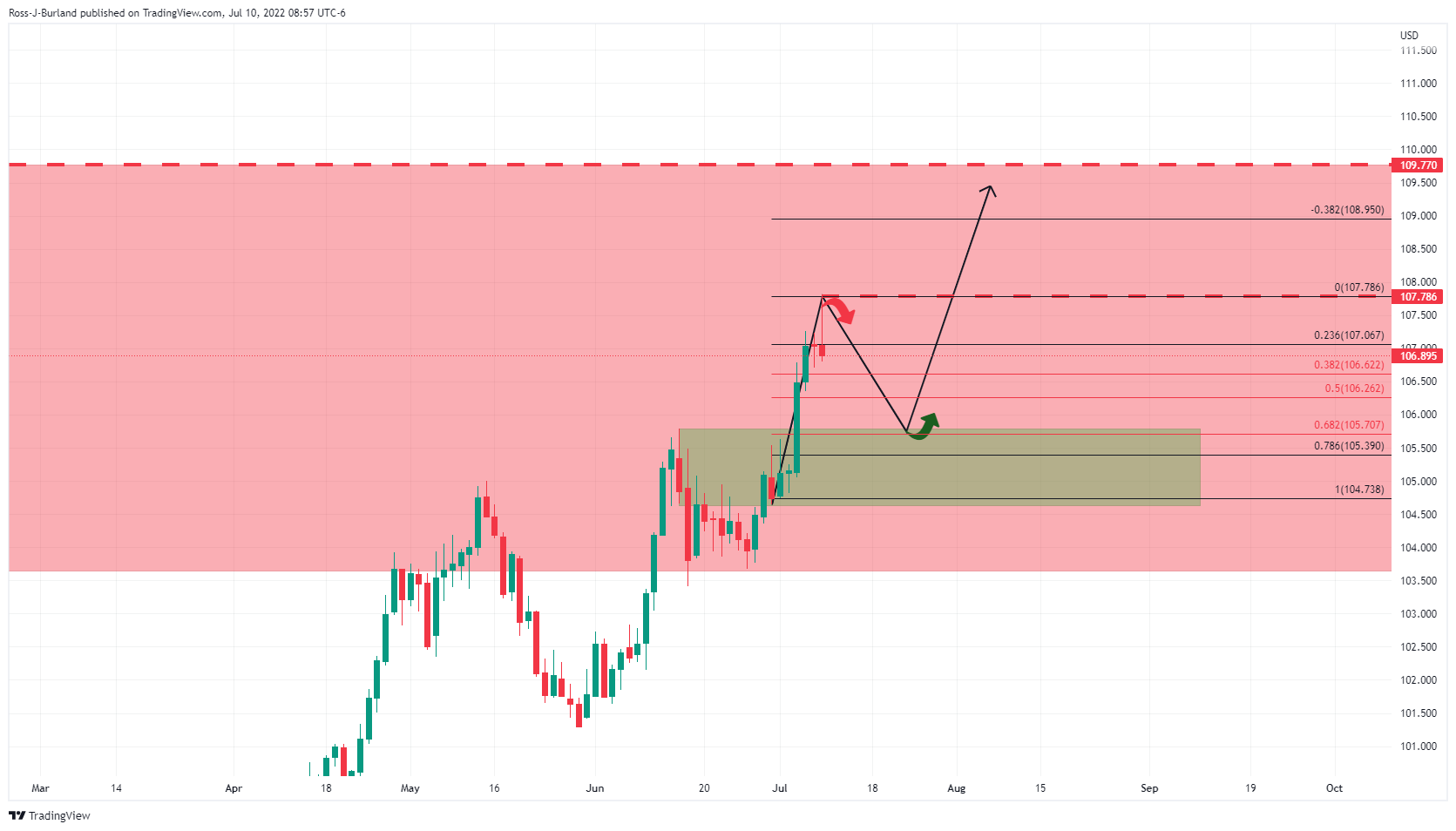 The DXY is meeting a monthly supply area that could hold off the bulls for a moment giving rise to prospects of a correction on the daily chart as it appears to top out near 107.80. A 61.8% Fibonacci retracement sits near prior swing highs near 105.70. If this were to play out, we would have had a bullish setup in gold for the week ahead.

The question is whether the last low was the spring, otherwise known as the final test lower and commitments from the bulls. A break of $1,750 will be encouraging. On the hourly chart, we have seen a 50% mean reversion and retest of what could be the spring so a bullish open could set the stage for a significant bullish breakout as per the hourly chart: